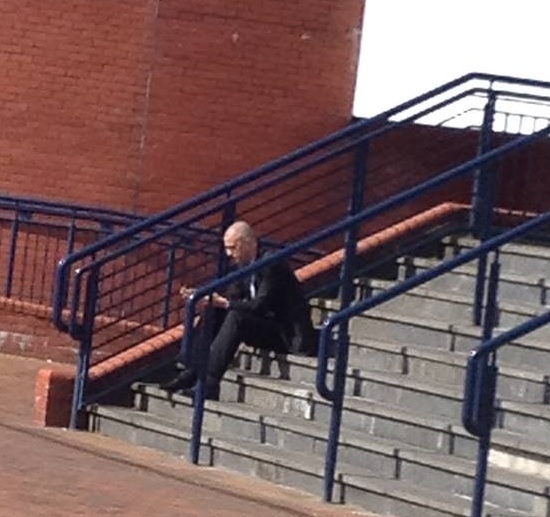 With Pacific Quay’s senior sports
correspondent Chris McLaughlin now banned from Ibrox, the BBC have returned
fire and boycotted Ibrox.
Many fans will respond to that
with ‘thank God’.
Truth is Rangers and the BBC have
had something of a troubled past, which truly began with Mark Daly’s expose of
Craig Whyte. In late 2011.
No one in Light Blue would argue
that piece was wrong – it was bang on the money, and Whyte was indeed a
fraudster who threw Rangers into absolute chaos.
The problem was thereafter, where
the BBC, taking this documentary as ammo, began what appeared a pretty
transparent agenda against all things Rangers and used the Club’s travails
constantly as a method of gaining attention.
The now-banned Chris was always
the one breaking the latest negative story about events at Ibrox, much of which
seemed to have been leaked to him by someone inside, someone who will always
remain the mysterious ‘mole’.
Every latest disaster in Govan
saw McLaughlin on the scene, such as then-CEO Charles Green and manager Ally
McCoist being called up to SFA headquarters at Hampden to answer yet more
charges – the (not very good, apologies) photo above is the rather lonely
looking soul on the steps to HQ that very day as he waited for something
negative to upload to his bosses.
The problem only got worse with
Mark Daly (remember him) when he compiled his foreign BAFTA-winning title “The
Men Who Sold the Jerseys”.
Where the Whyte expose had been
proven true, this one was just pure slander without an iota of truth. He was
willing to show Whyte emails on camera, but not the EBT documents he claimed to
have showing Rangers had broken the law. Reason? He did not have them.
That documentary was shown false
by the tribunal verdict – did Daly hand his BAFTA back? Nope, not likely.
And then recently the RST &
Copland Road have exposed the earlier-mentioned Chris McLaughlin’s dubious
sourcing of the match delegate at Easter Road where arrests were made yet McLaughlin
was first with that info?
This moved Rangers to ban him,
not before time, and the BBC have responded by boycotting Ibrox. Oh boo hoo I
hear you all cry.
One wonders how this can play
out; BBC need to use Ibrox for contractual obligations regarding match
coverage, particularly the Challenge Cup (and League Cup), and they cannot
exactly forego their legal obligation to cover the matches.
Consequently one wonders what
tone of coverage they will use – will it be a glut of slander or petty
commentary/punditry?
Either way it barely makes any
difference.
This troubled relationship
between the BBC and Rangers looks set to rumble on. It had abated following the
ousting of the board and the departure of Ally McCoist, with media work
involving McDowall, McCall and players like Kris Boyd.
But we now seem to have a
resumption of difficulties and it would not be unfair to suggest the BBC have
brought a great deal of this nonsense upon themselves.