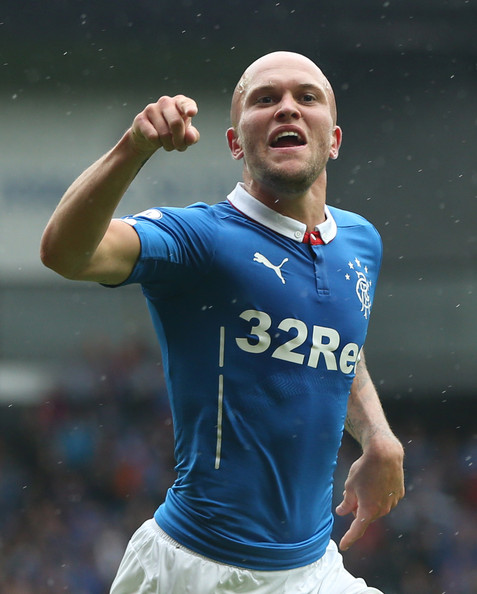 It is safe to say Nicky Law’s
signature was one of the most exciting Rangers’ managed under Ally McCoist.
Here was a bright young SPL
midfielder with a pretty good Motherwell team and he chose Rangers in the-then
League 1.
When I asked him how he described
himself as a player he said:
“A hard working attacking midfielder.”
So hopes were high, and,
initially, when we saw the side romp home 4-0 v Albion
rovers in the Ramsden’s Cup that year, him nabbing a brace, it looked like
McCoist had made a brilliantly astute signing.
Indeed, Law retained that form
for a few weeks and became a bit of an instant hit. Unfortunately it faded over
the coming months and 24 months later he was viewed as a colossal
disappointment, someone who, despite his goals, had not delivered anything like
what he was capable of.
He showed signs of that ability
when he produced a worthy Man of the Match display against Hearts in the
unfamiliar right-back role, but was AWOL in the playoffs.
He was highly speculated as being
sold this summer with a clutch of clubs linked; but then Rangers got a new
manager.
Mark Warburton, it is safe to
say, has been a complete revelation at Ibrox – six weeks into his tenure and he
has overhauled so much in Govan, and it has afforded every player a tabula
rasa.
That includes Law.
The midfielder admits he wants a
new deal, but the question is does he deserve one?
He concedes, to his credit, that
he has not played as well at Ibrox as he did at Fir Park:
“I haven’t played as well as I did in my
time at Motherwell.”
But it cannot be denied he has
improved under Warburton. While possibly not producing his full range yet, his
passing is sharper, his link-ups quicker and more methodical, his support play
more energetic, his work ethic greater, and crucially, higher pressing and
focus:
“It means less touches but more in the
opposition third – that’s the message he has sent me. I’ll be looking to play
well.”
While he was slow to get going v
Hibs (as the whole team was) there has been a distinct and tangible improvement
in his overall contribution since then. Law is playing higher, and able to
feed, especially, James Tavernier on the right flank who is gobbling those slide
passes onto his path with abandon.
Curiously enough he has not
actually scored under the new boss, which may be a sign of how he has
tactically altered under him, but if Law keeps this level up he may find
himself remaining at Ibrox beyond next summer.
“My contract is up at the end of the season
and yes, absolutely, I would like to extend it.”
He is going the right way about
earning it.