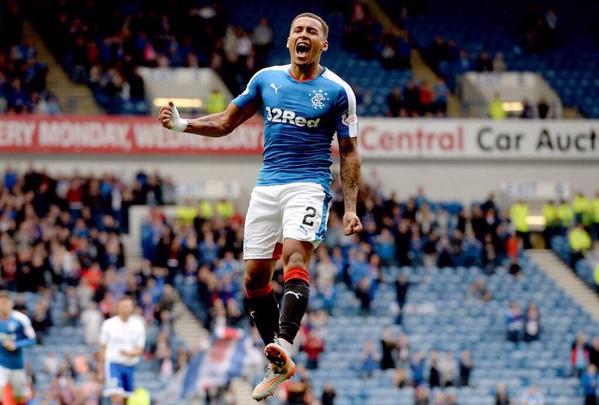 Rangers fans would have to go
back to January 2008 for the last time the side had a right back of any note.
His name was Alan Hutton and many
blue hearts were broken when he agreed an exit to English giants Spurs that
winter transfer window, to be replaced by the frankly utterly sub-standard
Steven Whittaker.
Whittaker spent more time being
out of position than providing tactical awareness on the right of defence, and
his successors included the ghastly Anestis Argyriou, the reasonable
Sebastien Faure, the brief and impressive but instantly discarded Kyle
McAusland then the utter mediocrity that was Richard Foster.
When Rangers were linked with,
then signed, Wigan’s James Tavernier to attempt
to solve that trouble spot, few fans had any hope he would be anything other
than a decent piece of the Mark Warburton machine. Indeed, trialist for that
position Reece Wabara had miserably failed in training to impress the new
manager, and did not even feature in any friendly matches before exiting Murray Park
permanently.
It was basically down to the
Latic to fill the void.
A few weeks later, three
performances down the line, and Tavernier’s impact can be summed up thus:
A beautiful free kick from 20
yards, an assist, a fine goal, and numerous marauding runs down the right,
linking up impeccably with Law, Shiels, and Waghorn in particular. Oh, and a
fantastically intuitive reading of the game with near-impeccable positional
sense – this lad knows when to get forward, when to defend, and when to
support.
He also happens to be superb at
tackling, with timing of the highest quality.
In short, James Tavernier has
been a truly exquisite signing who looks like he is more than capable of
playing for an SPL Rangers.
His goals, his play, ‘that’
backheel v Peterhead; at the level Rangers play at Tavernier is strolling through
matches with complete ease, and appears to have plenty in reserve should
Rangers make the step up.
Is he as good as Hutton; well,
harsh truth is Hutton never really nailed it in the EPL, becoming something of
a journeyman RB – so it might not be a completely invalid comparison to weight
them up against each other. He is certainly better than any player Rangers have
had since Hutton in that slot.
Tavernier will only get better –
the one weakness is some slightly errant crossing, but as his understanding
with his team mates improves, so will that.
He even understands what playing
for Rangers means:
“Words can’t describe how I’m feeling!! I’m
so proud and honoured to have signed for @RangersFC #WeAreThePeople”
Rangers have a right back we can
trust. It has been a long time since that was the case.