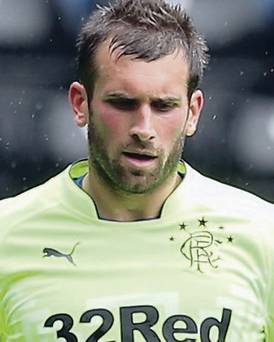 Rangers’ goalkeeping heritage is
a long line of shot-stopping luminaries, with some of the finest ‘keepers to
grace Britain having plied
their trade at Ibrox
In the 80s Rangers were blessed
with the likes of Chris Woods and present-day goalkeeping coach at Murray Park Jim
Stewart, while the 90s saw the magnificent Andy Goram take up the slots between
the sticks before Stefan Klos followed in his footsteps.
In more recent years we saw Allan
McGregor pull off maybe one of the greatest saves ever seen by a Rangers
goalkeeper away from home when he point-blank stopped Bremen’s Sanogo’s certain
goal, a stop which was every inch as good as The Goalie’s legendary point-blank
v Van Hooijdonk at Ibrox.
The point is, Rangers have been
lucky with the astounding quality their goalkeepers have brought to the team,
and while deputy Neil Alexander was appropriate for 2012/2013 and the Club’s
new circumstances, he was far from impressive and anything but a permanent
solution.
Hence, Rangers signed Cammy Bell,
the impressive stopper from Kilmarnock, whose displays had brought him wide acclaim
and a Scotland
call-up. He had been seen by some as the spiritual successor to Allan McGregor,
a very similar kind of ‘keeper; a talented shot-stopper the right side of 30
and perhaps slightly better than Scottish League 1 deserved.
Unfortunately, for one reason or
another, it has not truly worked out with Bell
and Warburton has made moves to sign ex-Swindon man Wes Foderingham. It is
being marketed as ‘competition’ but there is every inch the chance Warburton
has earmarked Foderingham as his first choice, given how frankly underwhelming Bell has been.
Knowing he was very much the
leading candidate to take the managerial position from Stuart McCall, Warburton
would have placed a very close eye on Rangers’ fortunes through the playoffs,
and one thing that would have definitely caught his attention was how poor Bell was at crosses,
clearances, and commanding his goal line.
I will not blame him for the
farcical lob error – it has happened to many a keeper. But it did seem to sum
up Bell’s
general demeanour in his time at the Club. Never terrible, never diabolical,
but always mediocre and rarely above it.
He did manage a few good saves,
his block v Raith in the-then Ramsden’s Cup final was a fine effort (albeit the
rebound still found its way into the net), but unlike the legends of the past,
few if any of his better saves defined the result.
One only has to Google “Cammy
Bell save” and most results relate to his Kilmarnock days, where it seems he
hit his peak and somehow has slid dramatically to become quite average at
Ibrox.
And may be very much looking over
his shoulder now that Rangers have an experienced English League 1-class
goalkeeper on board with age on his side.
No one claims Foderingham is in
the same league as the luminaries of the past, but it will only take him a few
high-quality saves to likely seize the slot between the sticks for himself.