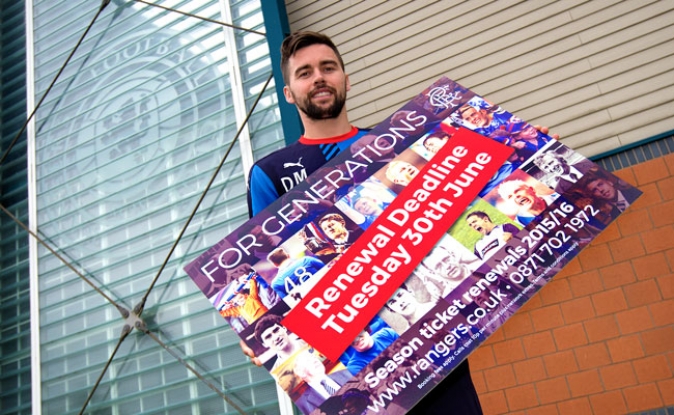 If anything was likely to send
alarm bells ringing in the mind of Darren McGregor, it was that new manager
Mark Warburton’s first two signings were centre-backs. Not one quality
defender, but two, and one cost a fee.
Last season’s Player of the Year
was widely lauded from most quarters for his robust, solid, and reliable
displays at the back, performances which surpassed what many fans expected from
him given his previous injury problems.
Unfortunately, like most of the
rest of the squad, he looked a lot less capable in the ‘marquee’ matches
against Celtic, Hearts, Hibs and Queen of the South – basically the harder
matches.
Sadly, these particular fixtures
seemed to expose his weaknesses rather starkly, an example being both he and
then-partner Lee McCulloch letting the rather short Leigh Griffiths beat them effortlessly
in the air at Hampden.
This pattern continued in the
playoffs, and while I am miles away from blaming him for the team being
sub-par, the frailties at the back against all three sides Rangers faced
clearly needed to be addressed, and to that end, Wilson and Kiernan find themselves
in royal blue, and McGregor has struggled to contain his disappointment that he
has probably been replaced.
On those signings he conceded:
“When I was reading the paper I was hoping
it was going to be midfielders and forwards that were signing, but it ended up
being a centre-half and a centre-half again.”
He went on to project the company
line that competition is welcome, and that these guys can ‘make him a better
player’, but the reality is he knows the two signings will be the priority
defenders, and that there is a distinct chance his auxiliary position of right
back will be sown up by Reece Wabara, should the trialist impress.
Where does this leave him? Likely
on the bench. He has shown himself a good defender against the bread and butter
of the Championship, but an arguably mediocre one against the best.
Where does
this leave Rangers? Stronger. To have a pretty decent defender like McGregor in
reserve, with potentially Zaliukas or Gasparotto as further depth, it
essentially gives Warburton the lean streamlined squad he demands with less
rubbish and more quality.
When called upon McGregor will
give everything, and there is no denying his attitude was good, but it may just
be that Warbs does not see him as a first choice.
If it improves Rangers, all the
better.