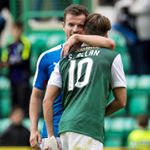 After yesterday’s buoyant result
for Rangers, matters have turned back to the ongoing Scott Allan soap opera, a
saga which has started to completely dominate Rangers’ summer business.
The latest developments in the
drama are thus:
Some media outlets are claiming
Allan is bitterly disappointed that a verbal agreement, supposedly made on his
arrival at Easter Road, is being reneged on. Said agreement was that seemingly
if a larger club was to make an approach for him, Hibs would honour it and
allow him to leave. Naturally, Rangers have made that approach, but rather than
honour it or demand a higher transfer fee, Hibs have issued a hands-off request
to Mark Warburton.
Naturally this has utterly
infuriated Allan.
Furthermore, the midfielder has
made a pointed claim on his Instagram account by changing his photo to him
hugging Rangers’ midfielder Andy Halliday folloiwing the result in Edinburgh, as you can see
in the title photo. If anything summed up his position, it is that.
The player is said to be ‘emotionally
shattered’ at Hibs’ stubborn request to even humour any bids from Rangers, and
wants the move to Ibrox only, as opposed to anywhere else.
And last but not least is milling
speculation that he is ready to make the final stand with his employer, and
hand in a formal transfer request.
However, one caveat in Hibs’
favour is the fact Rangers have only offered £250,000. It is plain to see the
player is worth more, and in fairness Warburton does need to up his bid in
order to have a serious gripe about the lack of progress in the deal.