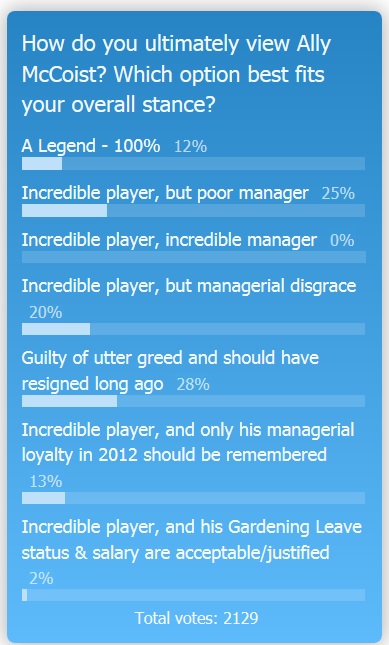 On Monday Ibroxnoise.co.uk
carried out a poll to get a ‘definitive’ view of Ally McCoist. In other word,
how did fans now see the former manager – favourably, unfavourably or
indifferently?
McCoist divides supporters more
than any ex-manager – with his four-year tenure splitting fans down the middle,
it felt high time to get a fairly substantial fan-base to provide their
personal viewpoint of whether or not his legacy stood up, or whether his
managerial reign tainted the legend.
The results are pretty damning.
Of almost 2200 votes, only a mere
12% were convinced McCoist remains a legend, while the most popular options
were “incredible player but poor manager” (25%) and the overall winner “guilty
of utter greed and should have resigned long ago” (28%).
It is a sad reflection of a man
who should be universally revered by all of a Rangers persuasion, but his
actions appear to have made a rod for his own back and his loyalty in 2012 seems
to have been voided by what he did thereafter.
Tellingly, only 2% of the entire vote agreed with his Gardening Leave status as acceptable or even justified, and no one thought he was as good a manager as he was player.