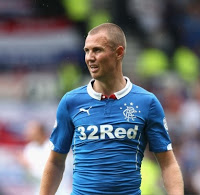 With Rangers reportedly
confirming Lee McCulloch will not be taking up any immediate coaching reins at
Ibrox, speculation about Kenny Miller instead adopting that position at Ibrox in
the future has surfaced.
Miller, 35, has admitted he wants
to “100%” become a manager at the end of his playing days, and to that end is
currently in the process of attaining his A-license, having already completed
part one of the three-stage process required to become an officially endorsed
and affiliated Uefa coach.
That initial portion, naturally,
was the B-license and once he gains the A, Miller’s sights are set on the Uefa
Pro License, which would round off the entire process.
He said:
“Coaching is the next stage of my career.
I’ve no thoughts of hanging the boots up quite yet. But it’s the next step.
It’s 100 per cent what I want and that’s why I’m doing the course so that I
have the qualifications under my belt, so that when the chance comes around I’m
fully ready to go.”
Rangers could do a lot worse than
employ Miller in the mid-term future as a coach – in terms of his playing days
he has seen it all and does not lack wisdom, but he also concedes he would be
around 37 or 38 before such a move ever took place.
“But, even now, the aim looking ahead to
next season is winning the league and getting back to the Premiership. Hopefully,
there will be a year or so left in me after that as well.”
He does accept though that a
player/coach role would be unlikely, wherever it was, and suggests such a role
is just too tricky to do properly.
“I think it would be hard to do both
roles. If you go into a coaching role you are maybe veering towards the side
where you don’t want to play every minute of every game and, at this minute,
I’m not quite willing to give it up yet.”
Whether Mark Warburton sees
Miller as a major part of the playing personnel next season remains to be seen.