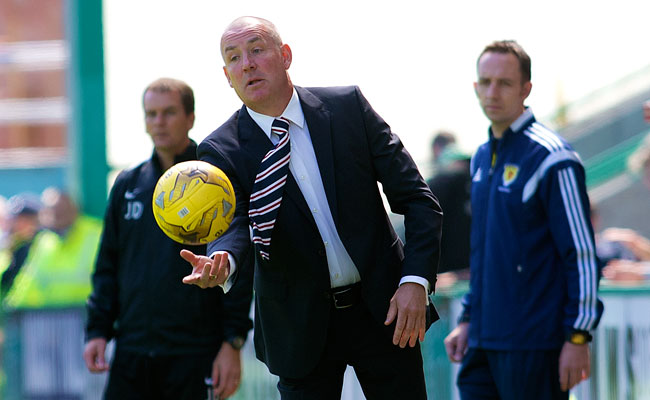 Listen. Can you hear it? No?
Normally this site, the Internet, Twitter, the stands, the pubs are filled with
digs at Rangers. Non-Rangers fans enjoy nothing more than to attack and laugh
at Rangers’ frailties and travails, while paying very little attention to their
own teams, it has to be said.
But following yesterday’s
stonking victory over Hibs (Celtic have never even scored 6 at Easter Road in their entire history) the digs, attacks,
insults, hatred and general loathing have been conspicuous by their absence and
this site, to name just one, has seen very very few non-Rangers supporters
making an appearance in the comments.
Why? Because for the first time
in three years the rest of Scottish football is actually starting to realise
Rangers have finally started to turn the corner towards a slow-burning return
to our old selves.
And we can solely thank a Mr Mark
Warburton for this incredible new Rangers ethos – a hard working, solid,
team-building machine which does not cater to the needs of any individual, but
insists that the entire squad is capable and not just the first team.
While that first half yesterday
was undeniably poor, the response after Tavernier’s equaliser was absolutely
what Rangers fans expect. Of course the team quality is a long way off Rangers
Standards; no one among our support, not least Warburton himself would attest
otherwise.
But for the current
circumstances, Warburton’s approach and professionalism is the biggest breath
of fresh air seen at Ibrox for some considerable time.
His press conferences have exuded
class, his interviews have been precisely what Rangers fans want and need to
hear. The difference with them compared with recent ‘managers’ is this guy
truly means what he says.
Rangers are a different animal
under Mark Warburton, the machine is starting to finally whirr into life after
an extensively long sleep mode, and it is evident Scottish football knows it.
As this site has said repeatedly,
Rangers have a long way to go. The next match v Peterhead could be a disaster.
But the point is Warburton has put the measures and systems in place for
long-term recovery – and one bad result or bad half is not going to halt that.
In fact, the bad moments will
only see the manager improving what there is, and altering what is there.
Warburton says the best plan B is
to do plan A better – and that was never more evidenced than at Easter Road.
Getting Mark Warburton was a
stunning coup for Rangers, and the result and performance on the pitch on Saturday
showed just how far the Govan men have come since Motherwell trashed them in
May.
Rangers could not be in a safer
pair of hands than Mark Warburton’s.