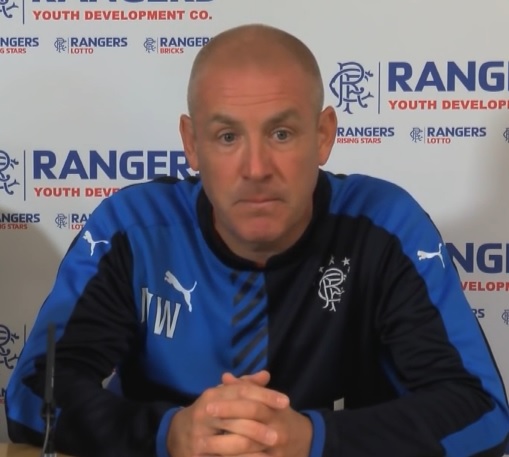 If there is one word which
describes how Rangers fans, by and large, view Mark Warburton since he became
the Club’s fifteenth manager, it would be:
“impressed”
From his extremely honest press
conferences which allude to hard work, regimented schedules, good
man-management and visions for the club, to the borderline heartwarming sight
of him on the sidelines as the U20s destroyed senior side Tynecastle FC 6-0, to
the shedding of eleven pieces of dead wood and shrewd signings like Danny
Wilson, Andy Halliday and Jordan Thompson, the changes Mark Warburton is making
at Rangers have been long overdue and thoroughly welcome.
Cast our minds back three years.
It looked like Ally McCoist had the chance to deploy the youngsters and use the
resources available to him at Murray
Park, with youth like
Barrie McKay, Lewis Macleod, Kyle McAusland and Luca Gasparotto all ready and
waiting.
As we know, he elected instead to
bring in a glut of expensive mercenaries and subject Rangers fans to, quite
frankly, the worst ‘football’ they will ever see at Ibrox.
The youth barely got a sniff. We
saw Emilson Cribari and not Luca Gasparotto. We saw Richard Foster and not Kyle
McAusland. We saw David Templeton and Steven Smith, and not Barrie McKay.
The only youngsters McCoist gave
any room to were Macleod and Aird. The rest were cast away to other clubs and
simply not allowed to grow at the rather fertile grounds of the Third Division.
Fast-forward to now. We see a
glut of young players being promoted to the first-team squad, we see our
manager attending youth matches and being quite honest about rearing these
youngsters, bringing them through and professing that “if they’re good enough,
they’re old enough, but they do have
to be good enough”.
Coupled with the rebrand of the Rangers
Development Fund to the Rangers Youth Development Company, and finally, Rangers
have a manager who genuinely cares about bringing in young players and giving
them a real chance to make an impact.
As he has said, there is no point
having these kids (or other players) training away day after day and not
getting a sniff of the team bus at the end of it.
Nicky Law, criminal underperformer
to date, had this to say about the new boss:
“From day one there were little things the
manager changed – we are in earlier now, we have a hydration test in the
morning, which the manager is big on and everybody has to be at a certain
hydration level before they train. It is all little things like the food
upstairs has changed and it is a bit healthier up there now, which has got a
few lads complaining!”
And:
“It is new and it has been enjoyable
but it has been tough as well, we have been having triple sessions most days.
It’s been a different type of training; it has been a lot of ball work which
probably isn’t what a lot of the lads are used to. Most people have been used
to mainly running based pre-seasons then the football comes a bit later but
from the first moment it’s been pretty much football based, although we have
done our running as well.”
From basics such as diet, to hard
regimented training with more ball-work, the changes are being felt far and
wide.
Add the fact the squad has seen
drastic wholesale turnover, and the changes speak for themselves.
Warburton himself also had this
to say about how he handles players:
“This environment here, in the football
department, has to be right. This is their place of work, and our job as a
support network around the players is to make sure the environment’s the best
it can be. If we do that, we’ll be alright.”
From training, to diet, to
man-management, to youth, to standardised tactics, this is only a glimpse of how
Mark Warburton changed Rangers.