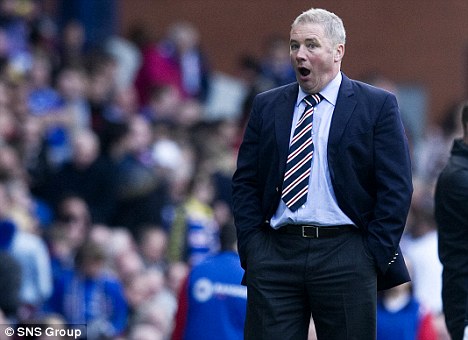 Summer 2014:
“I’m a Rangers supporter and it’s something
I’ve always wanted to do. They were interested before I left United and
meetings took place with my representatives. I was worried they wouldn’t have
the money to buy me and that’s what happened. I went to West
Brom but even then I still felt that one day I’d like to play for
Rangers. I grew up two miles from Ibrox and always hoped I’d get a chance to
play there. The first game I went to was against Aberdeen at Ibrox when Gazza scored a
hat-trick to win eight in a row. I was only five so can’t remember too much
about it. But Gazza was my hero growing up then I loved watching Gio van
Bronckhorst in the Dick Advocaat era. It wouldn’t faze me if I played in the
Championship with Rangers because they’re only one year away from the top
flight. As long as there’s an opportunity for me to develop and get regular
football I’d take it.”
-Scott Allan.
Scott Allan went on public record
as inviting then-manager Ally McCoist to nab him for free. Having been released
by West Brom, the former Arab was available to
anyone with the foresight to snap him up. He wanted it to be Rangers.
McCoist was issued that ‘come and
get me’ plea, a total freebie. He dismissed it out of hand, and instead elected
to sit on the ‘midfielders’ he had – Kyle Hutton, Ian Black and Nicky Law.
The rest, frankly, is horrible
history.
Now Allan is looking like he will
finally get his dream, but Hibernian will profit from McCoist’s woeful
mismanagement and loyalty to his little non-performing clique.
So, McCoist there has cost
Rangers anything from £250,000 to nearly a million or beyond.
Then we have the disgusting issue
of his ongoing lechery. His continuing Gardening Leave where he will cost the
Club a further £1M for doing nothing.
Willie Henderson and even
chairman Dave King have condemned it – in varying degrees, and more politely,
but it has not been condoned by many associated with the Club.

“This Club’s been very good to you, Ally,
you’ve earned a huge amount of money out of it. I think it would be nice for
the fans if they saw Ally give just a wee bit back to the Club. I think it
would augur well for himself.” –Willie Henderson
Even hardened supporters of Ally
McCoist in his playing days have finally given up on him and seen him for what
he now is, a greedy multi-millionaire who believes Rangers owe him everything.
So, that is that second million I
was on about.
It is actually beyond outrageous
that McCoist sits on the highest wage any non-player has received at Ibrox for
an unknown duration – certainly since 2012, and does nothing for the salary.
Nothing but damage in his
management days, and nothing at all now.
It is sad to see a former legend
like McCoist reduced to a money-grabbing Shylock, but that is what he has done.
And with Rangers now having to
pay for Allan rather than him already having been on the books (and maybe the
difference between promotion and failure) that is how Ally McCoist could cost Rangers
over £2M.