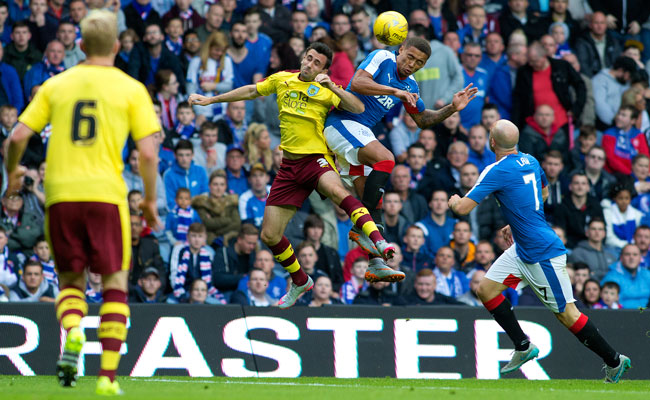 In 2012/2013 Rangers had to
tolerate Anestis Argyriou and Sebastien Faure, then thereafter Richard Foster
took up the right-back slot and made it his own, despite a brief and inspired
cameo from youth product Kyle McAusland.
Foster was far from impressive,
and truth be told, Steven Whittaker, for his faults, and there were many, was
the best RB Rangers have had since Alan Hutton.
Consequently it has been a
position Rangers have absolutely struggled to find a quality addition for, and
no solutions up till now have been adequate.
And while I am far from
describing James Tavernier as Dani Alves or Cafu, to say he is the best player
Rangers have had in that berth for over three years, going by last night’s
display v Burnley, is not far from the truth.
Some of his passes went astray, a
few attempts at lobbing behind Burnley’s
rearguard did fail to find Waghorn for whom they were intended, but otherwise
his play was very impressive, especially defensively, with, first half in
particular, tackle after tackle.
He appears to be that rare breed,
a full back who seldom gets caught out of position up front while a counter
attack is taking place against his side.
Tavernier appears to be
positionally excellent, with a fine reading of the game, knowing when to attack
and when to defend. He was always in position when Burnley
had the ball, and managed to retreat quickly when possession was lost.
When he attacked, he worked to
either beat a man or get a ball in – and that cross in the first half for
Waghorn was pinpoint.
It is a style of marauding full
back Rangers have desperately lacked – one who has a surprisingly good
understanding of the game and puts in full endeavour to support those around
him.
His link play was also
impressive, and curiously he cultivated a swift understanding with Nicky Law
who was able to spray wide passes for him to run onto on more than one
occasion.
I am not getting ahead of myself –
it was only a friendly, and he could have a stinker on Saturday.
But if we are to take his display
at face value last night, James Tavernier is the right back Rangers have sorely
lacked for far too long.
And Warburton has picked up an
absolute gem at a rock-bottom price.