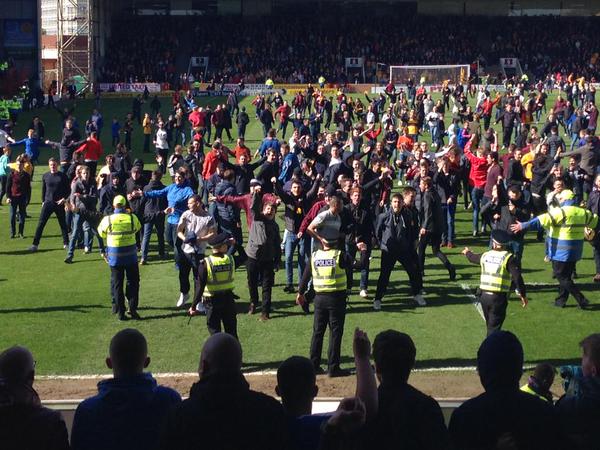 Before I go any further, this
entry is anything but a defence of Bilel Mohsni. Provoked though he was, his
response was completely unacceptable and Rangers are right to have publicly
condemned him.
Unfortunately, this one man’s
actions have been used by the press to completely excuse the absolutely
appalling events at Fir
Park before that
full-time brawl had even taken place.
The press reports focused 90% on
what the Tunisian international did, and borderline justified (or at least
played down) the shocking acts of the home fans.
First we had flaregate. Just like
at Ibrox, Motherwell fans set off flares – this is illegal in Scottish grounds,
yet absolutely no action was taken against the idiots guilty of it. It seemed
dismissed as ‘craic’.
Then we had the despicable attack
on Lee McCulloch by an elderly Motherwell ‘fan’ armed with a flag stick. First,
can anyone tell me what on earth a supporter was doing with an object of that
nature in the crowd? The fact someone was allowed to carry an object like that
is absolutely astounding. But then he had the absolute gall to swing it towards
Lee McCulloch as the skipper tried to retrieve the ball, smacking him in the
face, then did it again on his backside as he approached the ball.
Every non-Rangers fan either
laughed at the act, enjoying the fact McCulloch got a couple of hits, or
pretended the ‘fan’ had only been trying to hit the ball. The fact that he
swung again post-ball retrieval says it all.
The further fact nothing was done
about this says even more.
Then lastly we had the pitch
invasion by the Motherwell ‘supporters’ trying to intimidate Rangers fans, as
you see at the top of this entry. That photo says more than my words can.
Now, for every instance of ‘Motherwell’
so far in this article, switch it for ‘Rangers’.
Can you imagine the sanctions the SPFL and SFA would now be carrying out on
Rangers if the Ibrox Club’s fans had been the ones doing this?
Can you imagine the press reports in the red tops if the Ibrox Club’s fans
had been the ones doing this?
I can – they would have looked
like the ones that focused on Mohsni’s unacceptable behaviour have and painted
Rangers the bad guys in all of this.
Lee Erwin especially has played a
sly, cunning, but cowardly role in it – his ridiculous slam into the back of
Mohsni after the Tunisian had just lost the match and was high on aggressive
adrenaline, regardless of a handshake refusal, was absolutely disgraceful but
went completely without repercussions in the media. He was painted as the
victim, and even got a soapbox in that Scottish media to do so, and condemn
that ‘bad man’ Bilel Mohsni.
Sorry, but Mohsni is a big boy
who can handle himself – Erwin went too far – what did he expect in return, a
kiss? If anyone in this world gets attacked from behind, they have every right
to respond. It is true Mohsni probably went a little further than expected, but
come on! How many times have we seen CCTV footage of a brawl in the street
provoked by some idiot who shoved someone else?
‘Oh but he is a footballer, he
cannot do that’ – he is also a person, who has been attacked – and you are
telling me he cannot respond?
As for the rest of the Motherwell
fans, the response most SPL fans have justified their actions with are is by
highlighting balls of paper the Union Bears threw at Scott Allan.
I do not condone that – I found
those ‘missiles’ unacceptable and rather embarrassing – but there is a BIG
difference between directly slapping a player in the face and back with a pole,
invading the pitch and intimidating Rangers fans and lighting up illegal flares,
compared with annoying a player by throwing screwed-up balls of paper to put
him off his corner.
Can you imagine the press reports
if everything Motherwell fans did had been by Rangers supporters?
Of course you can.