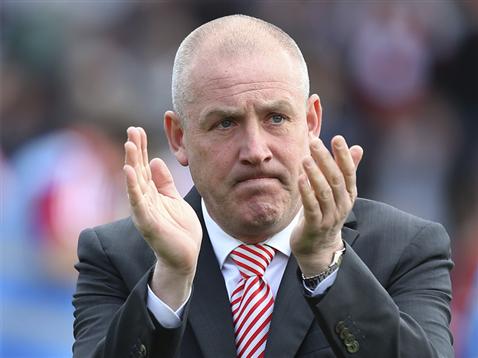 As Ibroxnoise.co.uk brought you
recently, it is now near-certain that Mark Warburton will be appointed Rangers
manager with David Weir his assistant.
The announcement is due to take
place tomorrow before the end of play, and in a poll on this site, the former
Brentford boss topped the list of candidates by a mile, gaining a majority of
the votes.
Warburton is clearly going to be
a popular appointment, but exactly what will he bring to Rangers; here are the
five key positives to this appointment:
The first critical aspect to
enhance his CV is that he got Brentford promoted at the first time of asking
from English League 1. This is a tough, gritty league, and he seized promotion four months after taking over from Uwe Rosler, second only in the league to Wolves. In other words, Mark
Warburton knows how to get teams out of hard leagues. His teams work tirelessly
for him, while not being afraid to play football. A radical contrast to the
utter dirge fans have seen for as long as they can remember at Ibrox.
The second one is a
counter-argument to the many who claim he inherited Uwe Rosler’s legacy at
Brentford and cannot be fully credited with promotion; at a much higher level,
the Championship, he nearly did it again, only losing out to playoff finalists Middlesbrough. He took a newly-promoted Brentford, that
he had only been in charge of for around six months, and began a fresh new
season in England’s
second-hardest division, finishing an incredibly respectable fifth at a frankly
laughably higher level than the Scottish Championship. It is worth noting that England’s
Championship is widely regarded by many as the strongest ‘second division’ in world
football.
The third one is the very, very real possibility that he will
bring Lewis Macleod back with him. With chairman Dave King promising a major
glut of high quality players being signed, they will not come cheap, and
Macleod will probably set Rangers back around what they sold him for. But the player
is on record as having not wanted to leave in the first place, and being keen
to come home too.
The fourth one is the fact Mark
Warburton is a fast learner. When he took over at Brentford it was his first
job in senior management, after being technical director at the Club for years.
Being a tech director at a Club far from guarantees you will be a good manager
for them; look at Milan’s
Leonardo and his dire switch from that role to the dugout. But Warburton went
into the deep end and not only stayed afloat, he swarm an effortless crawl –
one promotion nearly following another. He is the perfect fit to learn quickly
how Scottish football works.
And the last is by bringing Weir
with him, Warburton has a man who is in touch with what Rangers mean, are, and
who has himself plenty of experience as an assistant coach. Having a right-hand
man who knows the Club inside and out, who is thoroughly respected in football
circles, is going to be key for Warburton.
He is a very good appointment;
keen, intelligent, and with Weir at his side is well-equipped to deal with
Rangers, Scottish football and the change in culture.
If Mark Warburton can get lowly
Brentford to within a whisker of the English Premier League, he is probably
just about good enough for Rangers too.