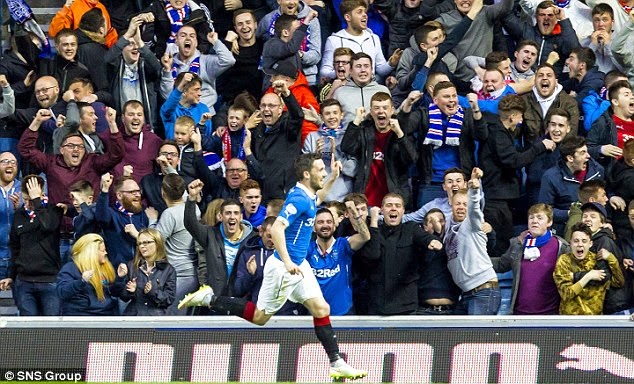 Last night two SPL-quality
moments defined the result. Nicky Clark’s sumptuous backheel to make it one,
then Kenny Miller’s audacious second, with the outside of his left boot on the
outside of his body.
These were excellent goals, but
they punctuated the severe work needed to be done with Rangers this summer if
the dream of promotion to the Premiership is realised.
And even if it is not.
The truth is, last night, as
joyful as the result was, and the confidence the players can go to Easter Road
with, the performance itself highlighted how staggeringly below ‘Rangers class’
the current crop really are.
Now, do not misunderstand; the
resilience of the team was remarkable – the fight to shut Hibernian out was
superb, and precisely what Struth meant when discussing Rangers’ players doing
their duties. The pleasure we all took from the result, and witnessing the
heart the players had, the will to win; it was precisely what we Bears demand.
But the cold harsh truth is few
if any of the entire Rangers first team are good enough for the fringes of an
SPL Rangers squad, never mind starting. The quality of football Hibs produced
simply outclassed Rangers – the toothlessness of their attack cost them, which,
in all fairness, was forced by Rangers’ defence’s determination.
Cammy Bell, decent though he has been for the level
we are at, is no Allan McGregor. Rangers used to have the best goalkeeper Scotland has produced since Goram, who now plies
his trade with EPL outfit Hull.
That we are proposing Bell, who has one cap for Scotland,
as good enough for the SPL for this Club highlights the extent to which our
standards have dropped.
The same applies to the defence;
it fought like lions last night, but Foster, McGregor, and Zaliukas are so far miles
behind the likes of Hutton, Whittaker, Goian, Bocanegra and Weir as to be
painful. Even Lee Wallace was not a first pick LB under McCoist’s SPL Rangers,
instead that position went to Papac and Ally tried to accommodate Wallace by
playing him in midfield. The two alternated.
In midfield it was once Davis and
Edu – it is now Murdoch and Shiels. This is not a dig at either of these two –
both have actually been arguably some of our best players since McCall arrived.
But Davis and Edu were SPL Rangers – Champions League SPL Rangers; no one could
put forth a convincing case that both of these are of that level.
Vuckic lacks pace but is clearly
a cut above every other player at Ibrox; he is the one asset Rangers have who
is just about good enough to play in the SPL at the level Rangers expect – but unless
the board forks out the asking price, he will not be here beyond next month
anyway.
Law is a bog-standard lower SPL
player who performs well in patches but his inconsistency defines him. In the
olden days he would have been a midfield version of Gary Bollan (remember him).
And then up front we seriously
struggle.
Miller, our best striker, is not
getting any younger, but produces when it counts – but he is far from a
long-term solution. Clark is a nuisance and
full of beans – but, that astonishing goal aside, lacks composure – there is a
very good reason he has not really asserted himself at Ibrox, and why 41 goals
in the-then second division for Queen of the South does not translate to 41
goals for Championship Rangers. And Boyd & Daly tell their own stories.
If Rangers do make the promised
land; if this hard-working and dogged Rangers side gets back to where it
belongs, messyrs King & Murray will need to overhaul the entire playing
staff otherwise it will come straight back down the following season.
You may all have read this and
are screaming ‘shock, the players are not good enough, could have told you that
years ago’ – yet the number of fans who try to justify individuals as being
good enough for the SPL at this Club seriously contradicts that.
Imagine how world class Allan
McGregor, Steven Naismith, Nikica Jelavic, Maurice Edu, Steven Davis and even
the Bocanegras, Goians, and Whittakers would actually look in comparison with
what we now have.
Even if Rangers fail to win
promotion, changes are needed. Heart & determination will only get you so
far.
You do need to be able to play a
bit too.