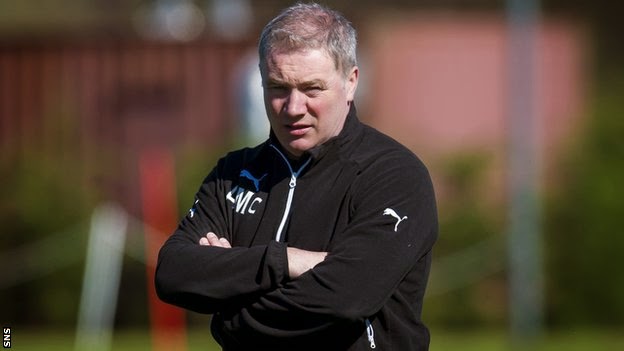 Last night Rangers confirmed that
Ally McCoist has effectively rejected the opportunity to ‘walk away’ from his
salary in the region of £850,000 a year.
As this site brought you yesterday, Dave King confirmed McCoist intended to see the remainder of his
deal (up till December) out on “Gardening Leave”, at a rate of around £72,000 a
month for effectively doing nothing.
But King also revealed there have been negotiations with McCoist
regarding a goodwill gesture of his waiving away the remainder of his salary,
as a symbol of what Rangers mean to him, negotiations it appears McCoist has
completely rejected.
Rangers fans long had the theory
that McCoist’s stance on this issue was originally provoked as a protest
against the-then regime of Derek Llambias and Barry Leach, and that he
symbolically refused to budge while they remained at the helm.
Ergo, it was widely conceived
that the former manager would then immediately resign once a new regime was in
play, and of course that act took place on the 6th of March, two and
half months ago.
But that predicted resignation has not happened and it is
safe to say McCoist is damaging his legacy with Rangers now. As a player he was
an icon of Ibrox, a true hero, genuinely ‘Super’ – it is safe to say he was a
disaster as manager but this prose is not focusing on his managerial
credibility or otherwise – but on his association with the Club.
No one would question McCoist’s
allegiances; he is a true blue like
the rest of us, and wants only success for Rangers. The man bleeds the same
colour as the other thousands and millions of Bears around the world.
But now even the majority of
pro-McCoist die-hard supporters have had enough of his salary – Rangers have
been in a desperate financial predicament for 36 months, maybe longer. And
McCoist has been made a multimillionaire by this Club, in exchange for being a
champion on the pitch and idolised by thousands.
The word ‘servant’ really is erroneous
when used about wealthy footballers.
And it is safe to conclude the
only thing McCoist seems to represent now is greed.
It has gone beyond the teetering
brink of him threatening to undermine his legacy – the longer this shambles of
nearly a million a year going into his pocket for nothing goes on, the more damage he
adds to the fractures already forming in the legend that he used to be.
McCoist has permanently sullied
his reputation among Rangers fans, fans who would kill to have one hundredth of
his fortune or salary.
Rangers yesterday confirmed a
second £1.5M loan from the Three Bears, totalling £3M now, and a portion of
that is purely and simply for Ally McCoist.
The longer he continues to siphon
badly-needed money out of Rangers for zero return the more damage he does to
what remains of the memory of his playing days.