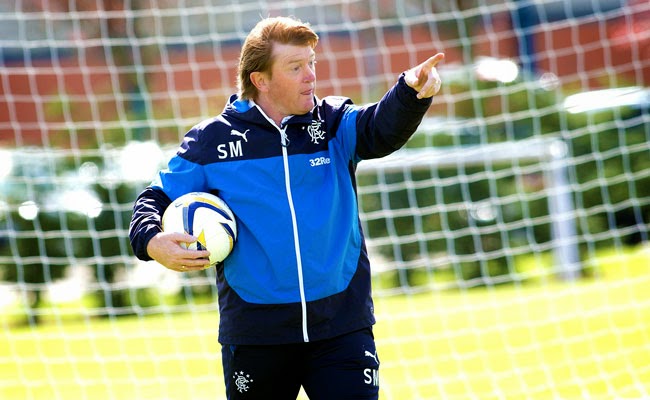 Rangers manager Stuart McCall
believes the Ibrox faithful had as much a role to play in captain Lee Wallace’s
goal on Sunday as the player himself did.
Speaking on the eve of the
crucial first leg against Hibs, McCall has expressed the importance of the
fans, and the extent to which they can help influence the match and inspire the
players.
He said:
“Against Queens
when we were a goal down, Kenny Miller had a header saved fantastically and
then they broke and the crowd huffed and puffed and then the ball went out and
they groaned and moaned and showed their frustrations.  So we’re just appealing for a little bit of
calm in the support because within a minute the ground was as loud as I have
ever heard it.”
So while the crowd’s displeasure
while the away side led was felt by the players, the resurgence a short while
later is what Rangers need more of, says the manager.
He went on:
“Then we broke 30 seconds later and Lee
Wallace was scoring and they got us that goal more than anybody.”
In other words, the crowd lifted
the players so much it was as close to the 12th man on the pitch
helping out to get that critical goal.
Lastly he added:
“As much as people will look at it from the
outside and say the crowd will turn on us but they can just as well back us
when it would be easy to do the opposite.”
It is clear the supporters have a
massive role to play tomorrow if Rangers are to take a good result to Edinburgh on Saturday.