Home Rangers Promotion today or not, it’s time for a new manager 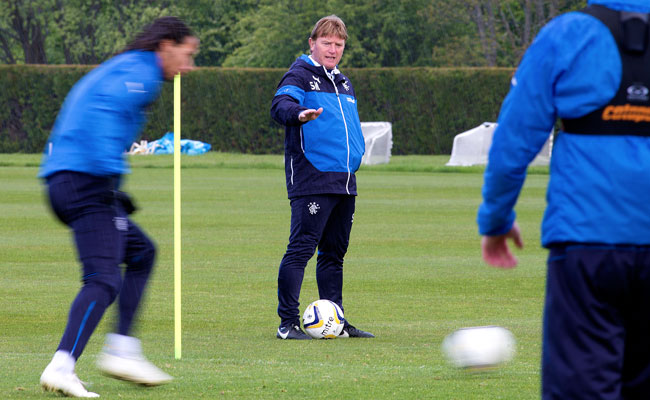 While not his most ardent fan
among Rangers supporters, this blog has nonetheless praised present manager
Stuart McCall highly for the short-term impact he has made in making Rangers
contenders for promotion, when previous regimes had the side sinking further
away from the notion.
Some of his tinkering has been
quite excellent, such as that 3-5-2 at Easter Road which saw Rangers’ first big
win against a serious promotion rival this season, and the use of Wallace as a
CB at Palmerston in another 3-5-2 which also utilised Smith as the left wing
back, Rangers prevailing 2-1 on the day.
So there is no denying McCall is
a safer pair of hands than those who went before him. Unfortunately, weighing
up his overall performance, even taking into account the absolutely cesspit of
a squad he inherited, it looks increasingly like he is not the man to lead the
Club into next season.
The names linked to replace him
have included Brentford’s Mark Warburton, Valencia’s Ian Cathro and MK Dons’
Karl Robinson, and it is very clear that approaches have certainly been made
towards them by Rangers’ board, who clearly believe, despite the overall
positive effect McCall has had, that they envisage a different path forward for
the Club.
Despite my own praise of him, and
despite the fact the tools he has are far from impressive, I would have to
agree that Rangers next season are going to see a colossal overhaul, regardless
of today’s result at Fir
Park, and that overhaul
will include a manager with a vision for the future.
If one observes what the
Championship runaway winners Hearts did, they took a risk on a completely untested
rookie in Robbie Neilson, shipped out all the ‘dead wood’ and cobbled together
a glut of club youth, handy free agents, and a few remaining first team
players.
Compare that with Rangers’
approach in 2012, of sticking with a clearly useless manager in McCoist, and
throwing all the money possible at SPL duds while ignoring all youth other than
Lewis Macleod.
The Hearts model, which I will
explore in another entry, was the cost-effective and intelligent approach,
which, admittedly guaranteed little and was of mild risk, but it clicked from
the first minute.
And this is clearly the route the
board wants now. To ship out all the out of contract players (rumours abound
they have already been told they can leave) and rebuild the squad with a decent
young coach, the best youth at the Club, and the best quality free agents in
the SPL along with the likes of Scott Allan, and the occasional other premium
signing.
In essence, a completely
different route from the one which has plainly failed over the past three years
and has left Rangers looking an absolute embarrassment.
McCall has made some tactical
errors in his time at Rangers, but he will not get a bad word from me; he put
his reputation on the line by signing on at Ibrox and overall he has done
remarkably well with resources as poor as Rangers have.
But he is not the right person to
take the Club forward, and none of the players are either.