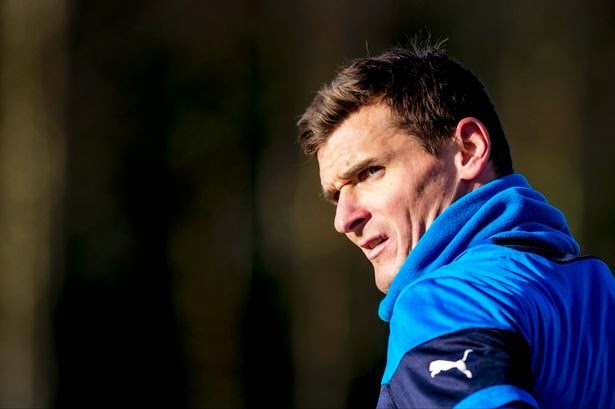 Stuart McCall has warned Lee
McCulloch he is no longer untouchable. Following his poor red card on Sunday,
pressure has mounted on Rangers’ captain, given his perceived immunity to being
dropped.
As broken here, it is understood
from a source close to Ibrox that McCulloch has a clause in his contract
guaranteeing selection if available, injury or suspension permitting.
However it was also understood
that some contracts drafted up by previous board incumbents are not being
viewed with the gravitas they previously held, and that one of the many actions
of the new board is to alter stipulations and redraft certain aspects of those
contracts. Or at least, ‘bend the rules’ a little for the good of the Club.
And one such stipulation is the
aforementioned ‘McCulloch Clause’, and McCall may just have let it slip that
the clause has now been renegotiated by the board and Rangers’ skipper is now as
vulnerable to being ditched as anyone.
McCall said:
“He has got to take his punishment and
move on now. He has got a two-game ban – whether he gets back in the team
thereafter we will see. Since I’ve been at the club he has done fine. He’s been
good in the dressing room and his performances have been good. If whoever comes
in over the next two games does really well, then he might not get back in. He’s
not undroppable, no, but at this moment in time with the games we have played
he has done nothing to merit being dropped.”
Admittedly the final part could
equally imply the clause remains intact, but a great deal of the rest suggests
the opposite.
McCall was very vague the first
time the question of a clause was asked, and rather than state McCulloch did not
have a clause, instead he generally espoused the importance of ‘the team
captain’ in football as a whole as opposed to Rangers’ captain Lee McCulloch.
This time is more explicit and
direct.
We will see in three matches’
time whether the ‘McCulloch Clause’ really does still exist.