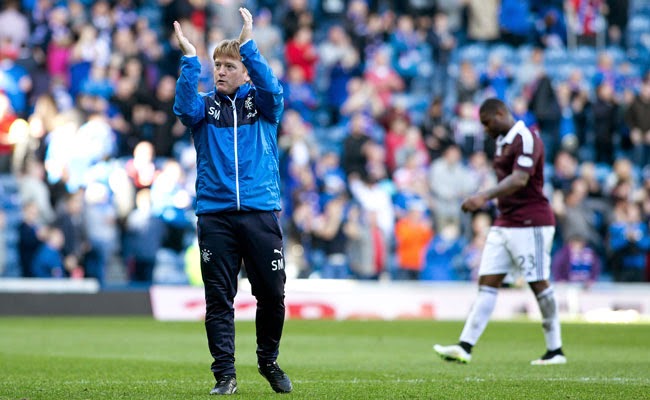 It was all going so well. 43
minutes on the clock and Rangers were two excellent goals to the good against
Hearts, rampant Hearts who had strolled to the Championship title with plenty
left in the tank.
It had been a professional
display from Rangers, with plenty of possession, a few chances, and two
clinically taken strikes to impose their superiority over their visitors.
The 4-4-2 manager Stuart McCall
had chosen, with Vuckic on the right and Shiels on the left while Murdoch and Law
operated in the centre, supporting Clark and Miller up front, was working
smoothly indeed – so much so that Miller had scored the opener and Clark was being a constant nuisance.
Unfortunately, captain Lee
McCulloch’s ridiculous red card threatened to undermine everything and undo
McCall’s masterplan for the game. But if there is a ‘best’ time to lose a man,
it is right on half time which gives the manager a few minutes to consider what
to change.
And if McCall needed a test of
his managerial credibility, this event was it.
He opted to not only sacrifice
Haris Vuckic, which in itself was the correct call due to his predilection for
attack, lack of defending and general absence of pace, but he put on Bilel
Mohsni and completely altered the formation.
Instead of switching to a 4-4-1,
he went outside the box and switched to a 3-5-1. This move won Rangers the match.
The first big change was going
three at the back – Mohsni and McGregor flanking Zaliukas. The back three which
shut Hibs out completely at Easter Road. This stopped an aerial bombardment as
all three of them are aerial colossus – Mohsni especially soaked up everything.
The next big change put Nicky Law
out of his comfort zone:
“It was great to be named as man of the
match, but you could have probably picked seven or eight man of the matches,
maybe even more. For me to get it is fantastic. I did end playing out on the right and I hope the manager doesn’t get
any ideas, I don’t want to be playing at right back to often this season! It’s
not my natural game, but he asked me to take the ball and get up the pitch
and waste some time when I can. I felt that I did that when I had the
opportunity and I enjoyed it.”
And it paid off – with Law as
right wing back and Wallace on the opposite side, it left Shiels, a withdrawn
Miller and Murdoch central and able to compress the space around them much more
easily – with harder pressing and support from both Law and Wallace, while
Clark provided an always-available outlet, McCall’s wily switch to a 3-5-1
enabled his team to work hard as a unit, compress Hearts’ midfield, and soak up
pressure more efficiently.
And Law’s stellar display at RWB
was magnificent, earning him MOTM and thoroughly justified.
This kind of Plan B, C, and D all
rolled into one is why Stuart McCall has been an absolute revelation at Ibrox,
a privilege for fans who have not had the pleasure of a proper manager since
early summer 2011.
As we know, McCall’s alterations
won the match for Rangers, despite a late Hearts goal threatening to spoil the
party. It could and should have been 3-1 if Clark
had had awareness from Law’s cutback. Unfortunately he rushed his shot and
Alexander easily picked up the tame effort.
But this is immaterial. Rangers
have a real manager at long, long last, one who has the players playing for
him.
These players want to play in the
SPL for Rangers under Stuart McCall. They might just achieve that.