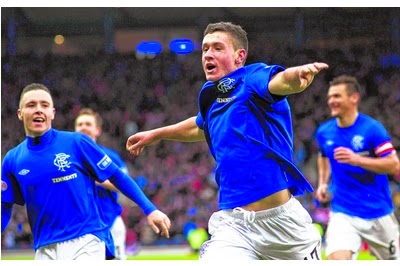 One change under Stuart McCall
has stuck out like a sore thumb. No, not Ian Black, he was ditched under
McDowall.
No, the most notable dismissal
from the first team since McCall took the helm has been that of Fraser Aird.
The young Canadian was a
first-team regular under McCoist then McDowall, and if not a starter a certain
sub. He was pretty much cast-iron match-day squad fodder, and his consequent
demotion to the unders has gone bizarrely under the radar.
I say under the radar as he was
extremely prominent in recent months for mouthing off to the media with rather
embarrassing comments and showing his youthful naiveté by making certain
diatribes in public he might have been well advised to keep a lid on.
Indeed, his stark departure to
the youth team has been remarkable, with just one appearance on the senior subs’
bench (v Cowdenbeath) since the regime change.
Where did it all go wrong for
him?
Let us not kid ourselves on; he
had promise. When he burst onto the scene in 2012/2013 he looked very promising
indeed. The winner at Hampden v Queens’ Park
indicated this young lad had real potential, with pace and a keen eye for goal.
Unfortunately, as so many under
McCoist did, he went dreadfully backwards, and after initially looking skilful,
quick, and dangerous, he quickly became a one-trick pony with no guile at all;
his entire repertoire became to tap the ball past the defender and try to
outrun him. He could not beat anyone with skill any more, his crossing went
from woeful to embarrassing, and he simply continued to regress, yet,
bizarrely, remained in the team.
It was not till the Old Firm game
that we saw the end of Aird. After having had as disastrous a first half as
anyone else in the team, Aird was hooked off by then-manager Kenny McDowall.
He has not played in any capacity
for the first team since.
McCall seems to have keenly
observed that Aird was never properly ready for the first team, and certainly
was not being coached correctly. He is now back under the watchful eye of Ian
Durrant in the unders, a guy who, let us face it, has put through some
remarkably talented players. As far as youth coaches go, Durrant is actually
pretty good.
Aird is clearly better off in the
unders for now – the team is doing not badly, and recently beat Celtic at
Lennoxtown.
But his rise to first teamer
followed by sudden dumping into the unders really has been stark, and one has
to blame McCoist for both failing to coach him properly, and continuing to
select him when he was clearly struggling.
Here is hoping Aird has not been
permanently ruined.