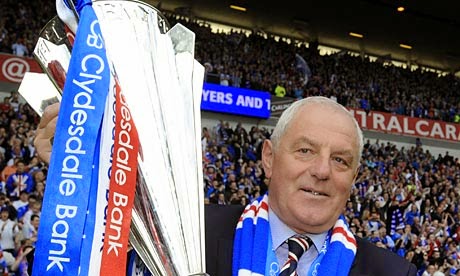 Walter Smith today has confirmed
he will not rule out a return to Ibrox in some capacity.
Speaking in Helensburgh at the
launch of local community schemes devised by Ardencaple Football Club, of which
he is president, Smith conceded he cannot completely sever his ties Rangers
ties with any certainty:
“I’m four years away from it now, it’s a
difficult one but I’ve always said I’d do everything I could to help them. But
whether that’s stretching it or not I don’t know. You never rule anything out but
I’m not looking for it in any way shape or form.”
He spent two legendary spells at
Ibrox as manager, and is arguably, along with the great William Struth, the
finest boss Rangers ever had, but his spell in the boardroom was a lot less
illustrious and he resigned after three months.
But there are few Rangers fans
who would object to a useful role for Sir Walter on some level, perhaps
ambassadorial or maybe as a chairman of the hopefully to be reinstated Rangers Fan
Board.