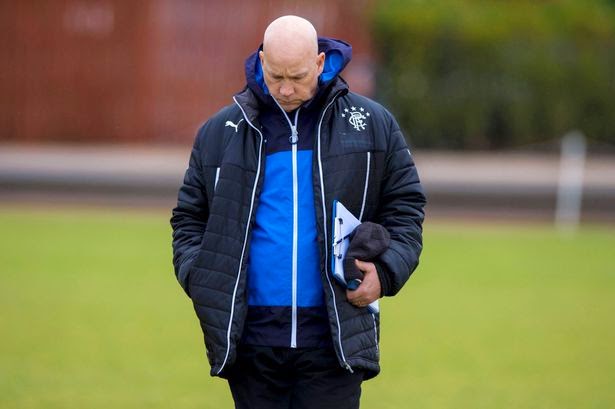 After the elation of the Rangers
fanbase following yesterday’s triumph at the EGM, there is absolutely no doubt
a wave’s crest was being well and truly perched. Morale was at a crescendo, and
while there are some small criticisms of certain comments made by the new
board, they were not enough to douse the feeling of rampant optimism swirling
throughout.
Even Dave King’s vision of a
new manager being a ‘coach’ and with priority on rearing youth players appeared
to be a tiny slight at the current managerial regime, with its emphasis on
playing dead wood and pals, while casting away quality young players such as
Barrie McKay, Luca Gasparotto, and Kyle McAusland to name just three.
However, if today’s utter
disaster taught the new board anything, it is the absolutely ghastly nature of
the current squad, and the stale and rudderless leadership of the management.
If they were in any doubt of the task they face, just on a football personnel front,
today’s events in Fife dispelled them with
aplomb.
I am not even going to discuss
the game in-depth, it might just have been the worst Rangers match in recent
memory, including the Alloa atrocities. It was truly scraping the worst barrel
of the lot, and Cowdenbeath were worthy of their point.
It just highlighted the ‘cautious’
approach to finding a new coach that King, Murray and Gilligan tried to
campaign for yesterday simply will not do.
There are at least twelve players
out of contract this summer, and none of them have earned a new deal. One of
them, Kris Boyd, concedes that entirely, to his full credit.
But equally dreadful is the
frankly woeful ‘management’ from caretaker boss Kenny McDowall, who is quite
simply the worst manager in Rangers’ history. Thirteen men have taken the
responsibility of managing this incredible institution, and somehow McDowall
has managed to plumb worse depths than his predecessor.
Bluntly put replacing him ‘slowly
and precisely’ is not an option. It is my conviction an entirely new management
team, whatever its structure might be, must be in place by, at the absolute
latest, the end of this month.
Truthfully it would be better off
in place by the next home match because as much optimism as seeing a new board
has generated with supporters, if McDowall continues to chuck Lee McCulloch,
Nicky Law, Kenny Miller et al at them, that good swell of feeling may be
short-lived.
I am afraid, Mr King, ‘energy’
just is not going to cut it to drag this team to the end of the season, you
have to act ASAP – McCoist and McDowall’s contracts must be terminated
entirely, paid-off if necessary (albeit many fans appear to want McCoist to
walk away without pay to show he has Rangers’ interests at heart) and replaced
as soon as legitimately possible.
Rangers fans do not deserve to
draw in the abysmally embarrassing manner their team did today, and all of King’s
men need to realise this right now.