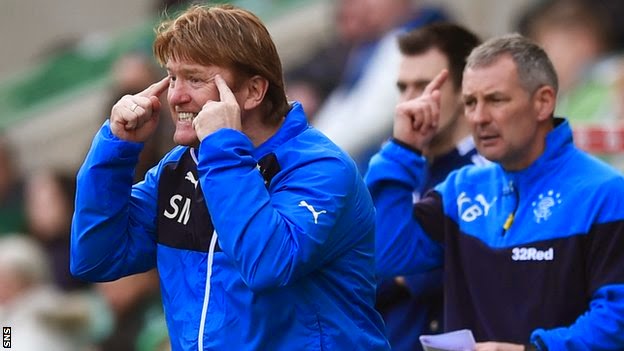 Going into Sunday’s visit to
Easter Road, hopes for a point, never mind three, were minimal at best.
New manager Stuart McCall had
struggled in his first two matches to instill his ideas upon the squad, with
the rot of the previous regimes plainly still engulfing the players.
Young Tom Walsh had had a
promising emergence into the first team, but him aside, there was not a lot to
cheer about, and add that team selection on Sunday morning and fans were
downbeat to say the least.
When the teamsheet was revealed,
everyone was appalled, yours truly included. Yet more McCulloch, with the added
unpredictability of Mohsni, while the invisible man that was Nicky Law
continued in midfield and Kenny Miller joyously partnered Nicky Clark.
The first reaction of most was
“5-3-2?!”. The fact five defenders were being fielded made supporters reach for
the cyanide and wave their white flags, again, yours truly included.
However, my one iota of hope was
it was the 3-5-2 I had predicted it was, with three men-mountains at the back,
two hard-working wing backs, three midfielders and two strikers.
It was.
And 90 minutes later this switch
in formation and tactic may just have been a master stroke by McCall.
The players were hungry,
methodical, tactically aware, and constantly pressing. Kenny Miller gave some
insight into McCall’s approach:
“The manager was very, very clear in
his instructions to everybody on the pitch. They knew what their job was and
they knew what their direct opposition was. I thought the lads followed it to
the letter and to the man it was a fantastic performance. We’ve looked at other
things in training too and it’s a fresh set of eyes on things. As I said he was
really clear in his instructions to every player on the field. The manager was
very clear in what his (Wallace) defensive duties were and everyone to a man
followed those instructions to the letter.”
But the urgency to attack with
care was abundantly clear. If we look at this:

It is clear (left) that after the
ball breaks from Rangers’ left flank, every player aggressively joins in with
the counter (right), with the will to fight for the ball and get involved.
Add that to suffocating defence
which completely stopped Hibs playing, and McCall blatantly outfoxed Stubbs.
Many opposing supporters argue Hibs played below par. They are absolutely
right. And why? Because McCall’s brilliant tactics stopped them.
In midfield especially, as the
game wore on, Allan, their fulcrum, barely touched the ball, as everyone in the
middle pressed in, including Wallace and McGregor inside from out on the flanks.
This formation absolutely works,
as long as the players continue to show that appetite. Getting the 3-5-2 does
not always work properly, the correct players are required – but McCall may just
have nailed it first time here.
Dare I say it, I even give
McCulloch credit as he played a lot better alongside two partners than he has
for years alongside one.
Keep it up Mr McCall, you may
just earn yourself that three-year deal you have mentioned.