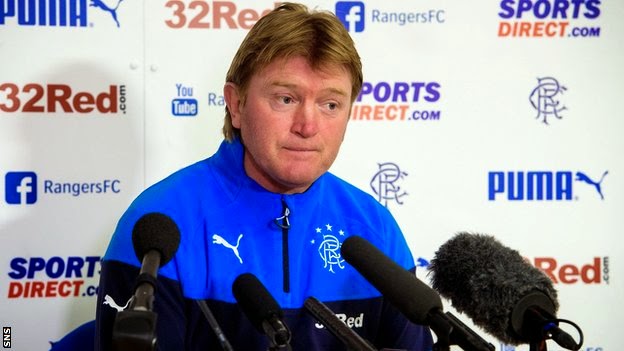 New Rangers manager Stuart McCall
has doused hopes of any drastic use of youth by dismissing the idea of using a
lot of younger players any time soon.
Speaking about how his family and
friends are urging him to drop various players (who remained nameless) and pick
others (also nameless) McCall dropped the bombshell that despite the Newcastle
Five emerging as a sham deal, and the absolutely hideous performances of almost
all the senior players, he does not intend to deploy youth on a large scale.
“I can’t flood the team with youngsters.”
He said in advance of Sunday’s
clash with Hibernian in Edinburgh,
despite the rather obvious fact the best players this season, outwith Darren
McGregor, have been the youth products. Players like Macleod before his sale,
and current incumbents Tom Walsh and Andy Murdoch have held their heads high,
while Colin Stewart of the Rangers Development Fund proudly announced a
£150,000 injection into the youth program.
Meanwhile young Canadian stopper
Luca Gasparotto has been called up to the national senior side once again for a
couple of upcoming friendlies, along with a training camp.
In other words, Rangers have more
than enough promise in the youth ranks to justify a larger-scale use of those
players, with the potential for around 5 of them (Gasparotto, Sinnamon,
Murdoch, Walsh, and Gallagher) to outright start.
Yet McCall has now stated this
will not happen, dispelling any notion of trying something different rather
than the same old same old.
McCall further rubbed salt in the
wound by adding:
“The key thing for them (Hibs) was the
January transfer window when they managed to keep their best young player,
Scott Allan, while we had to sell Lewis Macleod, who was ours. On top of that,
they were able to add five players.”
So it seems not only a sly dig at
McCoist for rejecting the notion of Allan who begged Rangers to sign him, but a
paradoxial concession of the importance of quality young players. While not
playing them; a very odd stance in all honesty.
Rangers’ fans desperation for the
younger players to be given a significant chance is falling on deaf ears,
regardless of who the manager is.