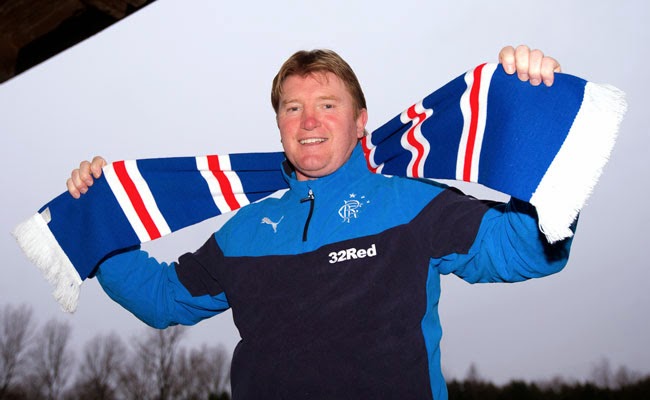 It is fair to say Stuart McCall’s
confirmed appointment as Rangers manager, albeit on a ‘trial’ basis depending
on performance, coupled with that of Kenny Black as his assistant, has been a
borderline universally popular decision among the fanbase. Unlike some other
calls by the new Rangers board which have already divided the support, this is
one which is endorsed by all.
A famous Ibrox son, an integral
part of 9IAR and, while maybe not quite elevated to ‘legend’ status, McCall is
certainly up there as a hugely respected, much-loved, and thoroughly popular
chap both in his playing days, and via his current management and media career.
So when he was officially
announced as Rangers’ manager on Thursday it was probably the most all-round
appreciated appointment the Club could realistically make.

However, McCall knows he has his
hands full to achieve anything with this ragamuffin Rangers squad, and indeed
in his first interview stated (regarding that first meeting he had with the
squad):
“The first five minutes there was a bit of
bad language regarding the performances of late…”
This is a man who clearly went
into that meeting all-guns blazing telling the squad they have been a complete
and ****ing disgrace and it is not good enough.
We wanted passion, and we clearly
have it. But what does McCall actually have to do to turn this season around
and, if not win the Championship, at least guarantee promotion?
Ibroxnoise.co.uk gives you a
step-by-step guide to the actions we believe McCall has to undertake in order
to make this a success:
There are probably more but these
stand out. Instil this lot into the squad Mr McCall and we might just see you
in June, signing new players for Rangers in preparation for the SPL next
season.