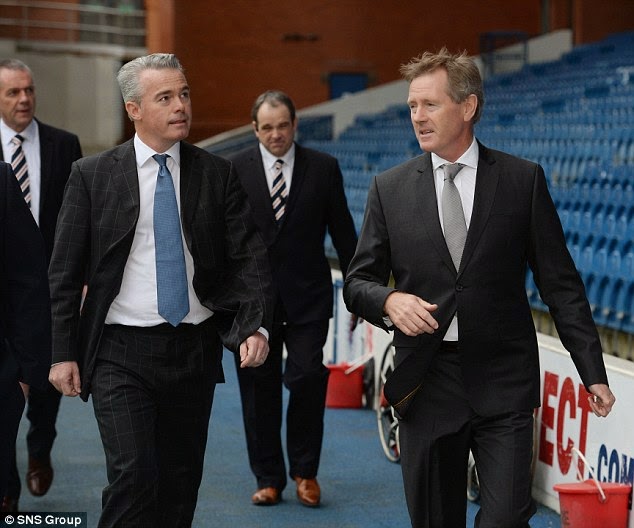 Pre-EGM now-ex CEO Derek Llambias
famously barked the following command to the Scottish press regarding his
‘opponent’ Dave King:
“Where’s your money Mr King, who is
your Nomad?”
The NOMAD, or ‘Nominated Advisor’
is essentially the PLC’s link to the stock market, in this case the London
Stock Exchange, otherwise known as the ‘Alternative Investment Market’.
When King’s group won the EGM,
one of the most pressing issues was the appointment of a new NOMAD given the
resignation of the existing one, WH Ireland.
Ireland was opposed to King, and
quit pre-EGM leaving Rangers frozen on the stock market.
In other words – Rangers could
not trade. For every minute Rangers were suspended from the AIM, and no shares
could pass hands, nor could any plans for a new share issue, as proposed recently
by the Three Bears, proceed.
Almost three weeks later, a new
NOMAD still has not been appointed. And Rangers remain isolated on the LSE, but
the curiosity is King himself is on record as saying this is ideal:
“In a perfect world, my personal preference for
the rebuilding of Rangers my choice would be not listed. But it is listed. And
I’m going to say that unfortunately
it’s listed.”
The regulations of the stock
market dictate 30 days to appoint a new NOMAD otherwise the company is removed
from the LSE altogether, and King stated a period of up to 28 days, or ‘four
weeks’ for negotiations with a new NOMAD to take place.
In other words, if King is truly
intending to get Rangers unfrozen from the LSE, he is cutting it very thin indeed. The SFA still have
their Fit & Proper Person diligence upon King to carry out, and naturally he
has no board power till that concludes, but the existing board still have leeway
to negotiate and get a NOMAD appointed subject to King’s approval.
The problem is there are exactly
12 days left till said NOMAD must be appointed, or Rangers are delisted,
meanwhile only 9 days left till the 28 days King proclaimed for the NOMAD
negotiation to conclude.
This is very, very close.
It is unclear if King is gambling
on the company being delisted, but if it is, all the fan ownership schemes will
have to slightly rethink their approach.
“Companies
do not have to be quoted on the stock market to issue shares. When businesses
start out, many of them raise money from outside investors, who are given a
share of the company in return. These investors tend to be friends, family or
benefactors and their shares are known as unquoted because the companies are
not listed on any stockmarket.”
The difference without being on
the LSE is the company does not have to answer to the rules and regulations
being on the LSE dictate.
As King himself said, being on
the LSE costs, and you have to gain the approval of a suit in London before changes are approved. For
example, the recent board appointments and resignations had to be verified with
the LSE before they could be announced on it.
Delisting means that is not an
issue. But it also makes the company slightly less accountable, given it
essentially answers to no one outwith its private shareholders.
It remains to be seen how this
curious little period in Rangers’ regime change transpires.