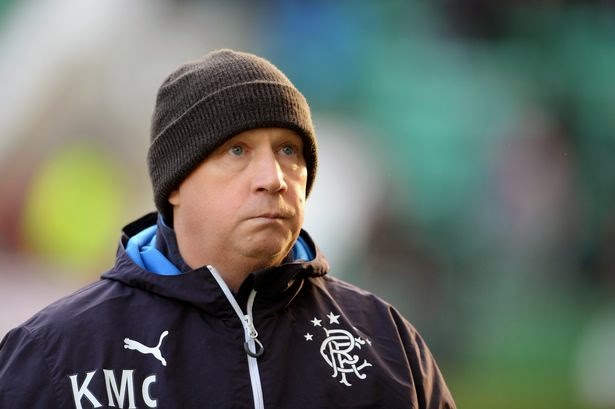 On the fifth of February
ex-Rangers’ interim manager Kenny McDowall was asked about the level of input
he had into both the signings of the Newcastle ‘five’ and selection of them.
He stated on the signings:
“When I was given the job (of Rangers
manager) I was told players incoming and outgoing wouldn’t be my
responsibility. So I knew that was the case, anyway. I take the team, coach the
team and I am more than happy to do that and get on with it.”

When asked who it was who told
McDowall he would not be involved in signings, he said:
“Derek Llambias & Sandy Easdale.”
When asked who told him they (Newcastle ‘five’) had to
play:
“Both. Derek and Sandy.”
Then-CEO Derek Llambias issued a
swift denial of this:
“There’s no way the board is picking
the team. The basis of any loan deal is that the players who arrive bolster the
side and give the squad more depth. That’s exactly what is happening
here.”
McDowall never disputed this
statement.
In other words both were accusing
the other of lying. Now, the instant reaction, given the conduct of
now-departed Llambias in recent months/years, and the general credibility
attributed to McDowall, is that Llambias was the liar.
However, let us look at the
facts:
Only two of these players have
ever actually played for Rangers, with the story going that three of them
(Mbubu, Bigirimana & Ferguson)
were injured from the off while Remi Streete went off injured on his debut.
Only Haris Vuckic has actually played more than 43 minutes for Rangers. Mbubu is entirely available having played the last two development matches (v ICT and Ross County).
Secondly, assistant coach Gordon
Durie promised Rangers would be looking at bringing loan players like McKay,
McAusland and Gasparotto back to Rangers:
“We have got boys out on loan and as a staff
we will sit down and decide whether we are going to bring anyone back or not.
There have been a few boys who have come though in the last few years but
obviously it is a big step for these lads to make.
We thought at the start of the season that it would be beneficial if we
sent a few of them out on loan. They had a great season with the under-20s last
year and the reports that we have had back have been very positive. So
hopefully they will come back ready to battle for a place in the first team.
It’s never easy for young boys to play at the Old Firm. But we thought
it would be better for them to go out and play against boys of a higher level
than they have played against before.
It would toughen them up, as they say, and then hopefully make them
better players when they come back. We’ve been out watching them and they are
doing well so hopefully that will benefit them in the long run.”
–Gordon Durie, 26th December 2014
Only, this did not happen and
McDowall appeared to ignore the notion and continue playing the Old Ally Pals
act.
Indeed, McAusland was entirely
freed. Durie also stated McDowall was the one who made the call to make
Robinson first choice, because McDowall had refused media duties the night of
Rangers’ win over Raith Rovers (20th February).
Thirdly, McDowall desperately
wanted out of Rangers. He had wanted out the moment he had been asked to become
the full manager. Pulling a stunt like this in a press conference would have
been a nice attempt to get fired, play the victim, and force the payoff he
clearly wanted, but it did not ‘pay off’.
Fourthly, in McDowall’s exit statement
yesterday a glaring omission was made when he thanked his colleagues: he
completely ignored Gordon Durie. The one promoting the concept of youth, and
the one who had to speak on McDowall’s behalf after that win over the Fifers
last month:
“Working with Walter, Ally McCoist, Ian
Durrant, Jim Stewart and all the backroom staff plus the staff at Ibrox and Murray Park
was a pleasure and I wish the Club well for the future.”
Notice the absence of Durie here…
Lastly was the curious Novo
story. Novo claimed he had been banned from Murray Park, and Kenny McDowall ‘corroborated’
his story, but Peter Lovenkrands, who had been training there at the same time
was reported off-record saying that both their periods training there (for the
Ricksen Tribute Match – which took place three days earlier) had come to a
natural end and it was a time-based allocation. You cannot just use
international world-class facilities for free forever. Indeed, the board backed
this up:
“At no time was Nacho instructed to
leave Murray Park due to him joining a Rangers
supporters’ group. The Club had permitted Nacho and Peter Lovenkrands to train
at Murray Park for a number of weeks in the lead
up to the Fernando Ricksen Tribute Match to allow them to get match fit. We
would like to wish Nacho all the very best for the upcoming season and thank
both him and Peter for taking part in Sunday’s Tribute match for Fernando.”

Even McDowall’s own ‘corroboration’ was cryptic:
“Nacho understood my decision. I was
only passing on instructions. We just move on.”
This was quite possibly something
lost utterly in translation by Novo (or he was outright lied to), and quite
possibly used by McDowall as another attempt to get fired.
This is far from pro-Llambias, he
really was a piece of work and I harbour absolutely no praise for anything he
did at Ibrox (absolutely delighted he is gone, in truth), but McDowall is being
lauded by many as some kind of ‘victim’ when no one held a gun to his head
forcing him to work. He could have easily resigned, but then, that would have
cost him his fat severance package.
Many reading this probably see it
the way they want to, as pro-board and anti that innocent lovely Kenny McDowall
chap. I despised the board by the end, so that just is not the case. It is, however, pro-Durie who I have a great deal of respect and admiration for. But I
refuse to join in this bizarre love-in towards McDowall, who my evidence
hopefully shows is not whiter than white.
Consequently I am not one to
automatically trust every word he ever said just because his opponent (the
Rangers board) was worse than he was.
A curious tale.