Home Rangers Why Kenny has to ditch Lee McCulloch 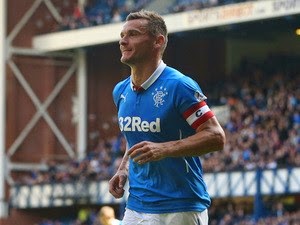 Regular readers of this site will
know over the years it has lacked affection towards Lee McCulloch. I have been
harsher than most about the “Big Jig”, heavily criticising his ability,
selection, and even attitude. I have stood by every word I have said, never
wavering.
Hence why the past few months of
fellow Rangers fans finally starting to realise the guy is a waste of a jersey
and a liability has seen me glad others finally observe McCulloch’s failings.
I want to be clear on this;
behind the scenes McCulloch has done much unpraised charity work, stuff that
goes unseen and unnoticed. Not for one second am I criticising the man outwith
football, but the truth is he could be a philanthropist and missionary worker
away from Ibrox and it makes no difference; within the context of Rangers the
guy is ludicrous and an utter passenger.

Signed in July 2007, McCulloch’s
arrival was greeted with a lukewarm reception. £2.75M was given by Walter Smith
to Wigan for his services, and while few
outright complained, it was not a capture anyone was especially thrilled about.
Indeed, McCulloch was little more
than a rotation player, a squad filler (other than 2009/2010 with 32 SPL
starts, the highest pre-2012 number of starts he managed was 20), and became
known as ‘Rent-a-Quote’ for his repeatedly irritating and overly regular
soundbites to the press during the tougher periods. And following Sunday’s Old Firm
defeat a little hint of that pre-admin McCulloch showed up again with the following quote:
“We were found wanting in the first half and
the cross came in too easy for the first goal, we stood off it. It came between the centre-half and the
right back and possibly the smallest guy on the pitch has got a header in so
that was disappointing. For the second goal we were playing about and instead
of trying to clear it we were trying to pass it about in the centre of the
park.”
I will not even highlight the
fact the captain is publicly blaming two fellow team mates for poor defending
when he has been Rangers’ worst defender himself for two seasons, and will
instead highlight the cowardice in not naming Darren McGregor and Richard Foster. If you are going to slag off your fellow pros, at least afford them
the respect of giving them a name rather than ‘guy number one, and the other
one’. And also make sure you play a heck of a lot better than them both too.
McCulloch himself was diabolical
in this match, choosing assault rather than defence. A stamp and an elbow
summed up his entire contribution, along with sharing a nice wee joke with Kris Commons
as they trudged off for half time. Before anyone points out Brown and his
thuggery, at least Brown can play.
Jig spends most of his time not
clearing the ball and letting his defensive partner produce about 90% of all
defensive aerial clearances. For three months when he first arrived, Mohsni was
a hero and very popular, but eventually doing 90% of the defensive duties to
cover a partner who spent most of his time with his arm in the air appealing
offside got to him, and his concentration began to waver. I argued at the start
of this season the same would happen to McGregor, and he too has gone rather
flat in the past two or three months as well.
What also bothers me is now that
Jig is actually player coach, he has the power of veto to put himself on the
sidelines and not play. But his ego appears to refuse to let him, and instead
of Rangers having a decent partnership like Zaliukas and McGregor McCulloch
remains untouchable and the first name on the sheet.
Then you have the Hall of Fame
entry. If ever anything undermined the Hall of Fame it was Lee McCulloch being
there alongside Brian Laudrup and John Greig.
I can almost hear his staunchest
fans calling me a Celtic fan in disguise and crying in outrage that I dare
criticise a man who ‘did not do walking away’ and who was loyal when we needed
him in 2012.
Kind of easier to be loyal when
you get paid over £500,000 a year aged 34, no one else would take you, and your
family is completely settled in Scotland
in a nice cushy big house. Meanwhile you get given the captaincy by default and
a borderline ‘written in blood’ contract where you are guaranteed to start when
available.
Would I do the same? Yes! I am
not castrating McCulloch for that choice or the reasons behind it. I am just
saying it cannot be used as a reason to defend his character in this context.
McCulloch is completely, totally,
and utterly finished as a footballer, and a symptom of the illness of the
McCoist regime which still resonates today. The ‘Old Pals Act’ is alive and
well, and younger, better players do not have a hope in hell at Rangers.
Which is why I truly wonder why
Rangers brought in two young defenders from Newcastle.
Jig will still start.