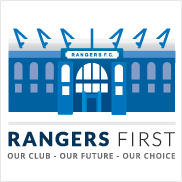 Yesterday news broke of celebrity
chef Gordon Ramsay subscribing to increasingly-popular fan-ownership scheme
Rangers First.
He joined a group which already
boasts the likes of Jorg Albertz, Nacho Novo, Alex Rae and a clutch of many,
many others on its books as subscribing to the notion that one day Rangers fans
will own their Club.

Before I go any further, this
article is not intended as a promotional tool or ringing endorsement for the
enterprise, so you are not reading an advert.
However, with Rangers lumbering
from one disaster to another, and with a loathed board remaining in place,
there was certainly a niche in the market for a properly-run fan ownership
system to rise.
Whether you translate Rangers
First as ownership or representation, it is ultimately an increasingly credible
attempt to ring changes at the Club and give fans more of an input into how
their beloved Rangers is run.
It stands at around 10,000
members, including many high-profile names as hinted at earlier, and has always
done its best to accommodate my questions and those of others.
In short, they engage with
supporters and do so with transparency, something sadly lacking from other
organisations and the Club itself.
Do I personally subscribe to RF?
No, because I personally prefer share ownership to be through a broker with a
direct vote, and right now the numbers at RF are not big enough to make a
fundamental difference. The shares it owns are less than 2%, but that is still
only 3% off the power to force an EGM.
But I do endorse what they are
trying to do, and the manner in which they do it.
I would never preach to anyone to
join them – that would be hypocritical given I am not a member myself.
But of all the fan groups,
schemes and initiatives, they are up there as one of the most sincere, genuine,
and transparent.
Anyone who wishes to join them just click here.