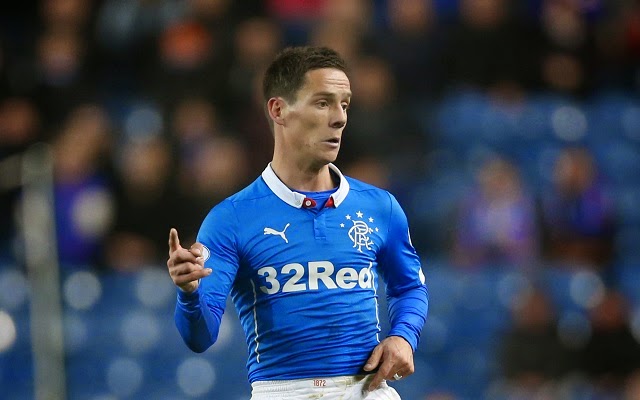 When Ian Black ran the show for
Hearts’ Scottish Cup final success of 2012, ‘Blackie’ must have felt the world
was at his feet and a big move to some decent Championship side was on the
cards. In his wildest dreams maybe even a lower-table EPL side.
Already one of Rangers’ most
hated opponents for his disgusting tackle on Nikica Jelavic in 2010, which he
did admittedly apologise for, instead of making his way to the rich plunder of England,
Black’s arrival at post-admin Rangers in summer 2012 was a strangely popular
affair from those of an Ibrox persuasion.
Some fans these days claim they
were horrified at Rangers bringing in such a loathed opponent, yet there was
strangely little sign of such abject objection at the time (except from yours
truly) maybe due to the exodus that had slimmed the Rangers herd to
near-apocalyptic levels of dire need.
Indeed, he was borderline
welcomed as a hero, for ‘sacrificing’ a better league and joining Rangers in
our ‘time of need’ (a phrase which is becoming a bit of a cliché to justify the
mercenaries who stayed like Alexander and McCulloch who had no options
elsewhere at their age – Wallace is entirely excluded from this as he could
easily have got a better gig down south) and ‘helping the cause’.
Truth was Black, like so many
others, joined for the money.
As I brought to you a few weeks
ago, my sources tell me he gained a lot more of that filthy lucre in recent
months, when a contractual appearance clause is said to have come into effect
and a resultant wage increase to £10,000. The problem is Ian Black has never
even justified half of that wage, nevermind the lot.
His first season at Ibrox
was…awful. He did suffer the same problem of the turgid McCoist regime
beginning in earnest, but then that excuse fails to completely tally up when we
see how the likes of Lewis Macleod and Barrie McKay managed to perform under
the same circumstances.
In truth his second season, from
August to November 2013, was a substantial improvement, and for about three or
four months Black looked like a reasonably decent defensive midfielder.
Unfortunately that is where his
‘form’ ended, permanently and bluntly speaking Ian Black has barely put in a
single shift in 18 months since worth talking about.
I will not go into the betting
charges he was guilty of, it has been discussed time and time again and it is
for another debate, but it does sum up the litany of uselessness Black has
become, and while manager Kenny McDowall has hardly carried out his new job
with panache, ditching Black, Old Firm aside, was pretty bold and ultimately
totally justified.
Black really is part of the stale
“Old Ally Pals Act” and you have to give credit where it is due and applaud
McDowall effectively dumping him and replacing with Kyle Hutton who has seized
the opportunity and produced his best football as a Rangers player.
I have not even touched on the
numerous times Black has outright disgraced himself on the pitch, such as at
Tannadice when he let down the team to a tragically embarrassing level, plus
his ghastly display v Raith recently which led McDowall to hook him off for
probably the last time.
It is not often Rangers fans
cheer a player off in relief that he has gone, but they did that day, and
Blackie did not look a happy chappy at all.
He is out of contract this
summer, and he is a wage Rangers need rid of, as well as a disruptive influence
off the pitch. From what I understand (I have never met him) he is actually a
gent away from football, and a genuinely decent guy, so this article is not a
personal character assassination, but when it comes to football, and Rangers in
particular, which is what this blog focuses on, he has been a truly woeful
acquisition and a contract renewal would be a horrendous mistake.
Why did we sign him again?