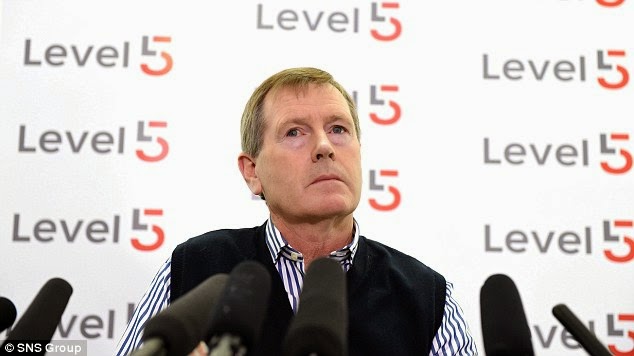 As every man and his dog now
knows, Rangers’ long-awaited EGM has been pencilled in for the fourth of March.
Just under a month till the most hyped-up vote…since the last one.
For those who may have
(understandably) tried to avoid all this nonsense, the deal is fairly simple –
Dave King, John Gilligan and long-time Rangers’ ‘associate’ (former director)
Paul Murray are vying for control at Ibrox, via a majority vote of shareholders
to take place in London.
It is worth remember the last
time we had a vote where fans fully expected Murray, his namesake Malcolm, and
the other two requisitioners Murdoch and Wilson to seize control of Rangers over
the ‘then’ board (Wallace, Somers, Stockbridge et al) they were handsomely
trounced.
The landscape is admittedly a
little different now, with the so-called Three Bears and King now major shareholders
collectively seizing just under 32% of the entire company.
But that still leaves a vast 68% of
the vote up for grabs and it would be a fool who would predict anything other
than either a very close call or an outright board win.
I should point out this is
anything but pro-board. This blog has received some ridiculous pro-board
accusations, where I have done nothing but condemn the likes of Somers’
appalling behaviour and attitude along with criticising the Easdales’ failure
to bring in serious investment to the Club.
But fact is the (corporate) shareholders
are always far more likely to vote for the existing board, despite what the
fans want.
Sandy Easdale has just over 26% alone
(through proxy, of course) while breaking down the rest is anything but simple.
But removing 26 from 68 and you have, basic arithmetic, 42% to actually fight
for.
However, such is the fluid nature
of shares and the stockmarket, the ownership of them changes on a daily basis
so there really is no such thing as a definitive breakdown of exactly who owns
what. But further to the 42% number is the 9% that Ashley roughly owns, which
brings it down to 33% to fight for.
Then you are left essentially
with the fans’ groups like BuyRangers, RangersFirst et al and the hedge firms
like River & Mercantile, Margarita etc.
The problem for supporters who
want change is the Ashley/Hedge firm/Easdale glut of shareholders is quite
simply bigger than the King/TB/fan groups one.
Fans hoping for a King win have
to hope the hedge firms follow Laxey’s lead and side with them – although debatably
that sale was based on the fact Rangers’ shares make little to no money and
that is the base point of a hedge firm. 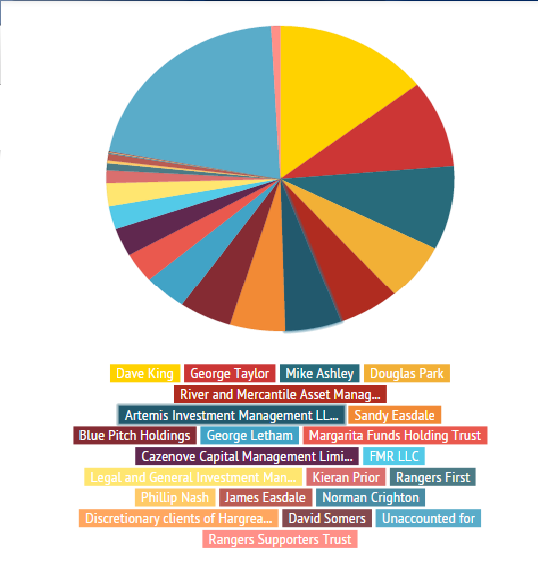 The above diagram (credit:
Gersnetonline.co.uk) gives, roughly, a visual representation of the breakdown
as things stand at the moment, but it inherently cannot be entirely accurate.
Expect anything but a foregone
conclusion in London.