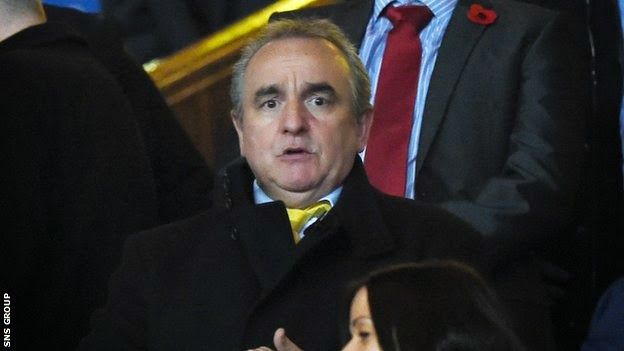 Earlier today Kenny McDowall made
a bold claim that he had been directly ordered by CEO Derek Llambias and Ltd
chairman Sandy Easdale to play all five of the Newcastle loanees every match.
In yet another twist in the
infinite cosmos of the Rangers saga, Llambias has tonight rejected this
directly. In an interview with Sky Sports News HQ Lambias said:
“There’s no way the board is picking
the team. The basis of any loan deal is that the players who arrive bolster the
side and give the squad more depth. That’s exactly what is happening
here.”
There are a few possible
conclusions one can draw from this latest unsavoury episode of the Rangers soap
opera.
This probably reads a little
pro-board. I was once more lenient to the Ibrox board when it had the likes of Mather
or Wallace as CEO, but this current incarnation with Somers is dreadful and is
conducting itself with no dignity at all. He sums up the rotten core of the
administration of the club. So I am not in cahoots with the suits.
But no one can deny McDowall’s
comments and actions of the past two months have mostly been negative as well:
handing in notice, waiting for Gardening Leave, picking absolutely horrendous
teams, supporting Novo’s version of events, claiming he was told to bin Durrant
to the unders, and now this.
I am far from turning on Kenny,
he is just the wrong man in the wrong job and desperately wants out. But his
contribution is no better than anyone else’s in this sorry saga and very few
(if any) employed by Rangers are carrying themselves with any dignity at all
now.