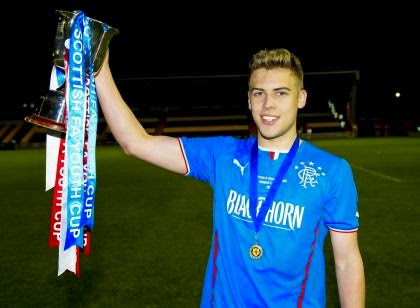 With young Andrew Murdoch having
such a stellar display at Stark’s Park on Friday night, banging in a pearling
25-yard sizzler into the bargain, it is worth revisiting the Ibrox youth
policy, and examining three of the most significant names whose fortunes have
contrasted vastly.
As per the title, this entry will
focus on three specific Murray
Park youth products and
focus on where their careers are.
Let us start at the top, with the
man of the hour, and currently the toast of Ibrox, Andrew Murdoch. 20 years
old, former unders captain young Andy broke into the first XI on the 8th
of this month when he replaced the dreadful Ian Black on the 74-minute mark v
Raith. I proposed we may have seen the last of Black in that match, and since
then he has been permanently on the bench with Murdoch snatching his place.
Murdoch really has taken his
chance with aplomb, with composure, workrate, vision and industry that has
been all-too-often absent from his more ‘illustrious’ peers – Murdoch has
thoroughly shown up not just Ian Black but the majority of the underperforming
first team, and that absolutely gorgeous goal in Fife on Friday summed up his
rise to prominence.
He has formed a truly solid
partnership (I am not going to call it incredible, this is Kyle Hutton &
Andy Murdoch, not Yaya Toure & Claude Makelele) with Hutton and both have
really helped this team achieve something resembling a bit of form.
Murdoch has been quite a find,
and deserves to remain in the first team for the foreseeable future.
Now we move onto the first step
on the scale down of frustration. Barrie McKay burst onto the scene in 2012
when he debuted at ‘the hedge’ of Brechin
City. While I would not
allude him to Ronaldinho or anything hysterical, he did show a deft flick,
vision, skill, craft, and pace, and looked like he was a ready-made replacement
for the likes of the departed Aluko on the left. 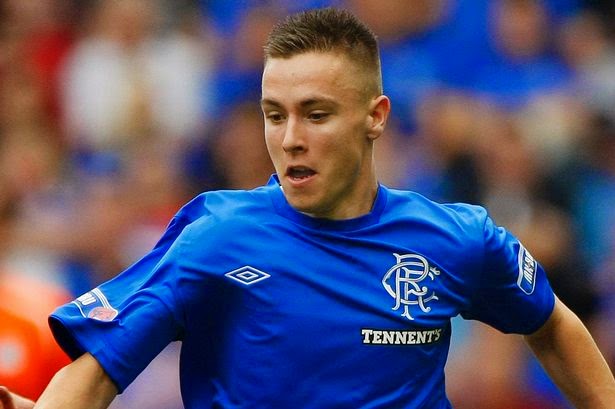 Aged only 17 on that debut, his
maturity was astoundingly beyond his years, and young McKay managed a very
respectable run of games till manager Ally McCoist dropped him. The story
initially was ‘burn out’ but then oddly the same logic did not seem to be
applying to any other young player like Lewis Macleod.
As time wore on, McKay was
increasingly frozen out the first team, despite the quality he had clearly
shown, and half way into League 2, he found himself shipped out on loan to
Morton. This infuriated fans who had felt he would be part of the team in a
significant capacity that season, but instead he made few appearances and ended
up in Greenock.
He returned in the summer of 2014
with hopes of finally resurrecting his Rangers career but once again McCoist
did not look twice at loaning him out again and he made the trip to Fife to join Rovers on loan.
When Ally left the job, the
promise of youth players being given a chance by Kenny McDowall seemed to
especially relate to McKay, but once again it was another false dawn as the youngster,
temporarily back at Ibrox at the end of his previous loan, found himself on a
return journey back to Kirkcaldy.
He remains there to this day, and
one can only wonder what McCoist and McDowall saw/see in the likes of Steven
Smith and the perennially underperforming David Templeton to prefer them over
McKay on the left always.
Once this season is over, the
(misguided) hope is a new regime will finally see a developed and mature McKay
back at Ibrox and very much part of the new era.
Last but not least we come to the
most frustrating one of the lot: Kyle McAusland. Another youth product from Murray Park,
Kyle rose in stature when he filled in in 2013 during the ‘trialist’ period at
right-back when Rangers were not allowed to field any more than three of their
new signings, and they had to be registered as trialists rather than full
signings. 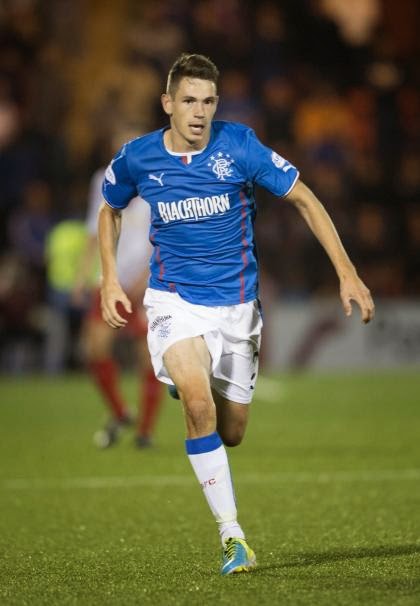 McAusland slotted in perfectly on
the right during such impressive wins as the Albion Rovers away win in the-then
Ramsden’s Cup and looked every inch the worthy candidate for that RB slot.
Until, that is, McCoist decided he had had enough of him too and froze him out
as soon as Richard Foster was available. McAusland was shipped out pronto to Ayr, before he went through the same hoops McKay has with
a subsequent spell at Brechin.
The difference here is McAusland,
rather than now being on loan with yet another club (or the same one) from 2015
onwards was instead let go entirely by McDowall and joined Dunfermline
on a free.
Great work, leaving Rangers with
Foster while we thoroughly strengthened a team whose fans chanted various
hate-filled nonsense at the club during Rangers’ visit there.
So there we have it, the curious
scale of Rangers’ youth success down to the bizarre ‘failure’. The youth scheme
at Ibrox has been a disaster at best and non-existent at worst. For every Andy
Murdoch who breaks through, a glut of equally good players (McKay, McAusland,
Gasparotto, Telfer) either get let go or rot at lower-league teams instead.
The team would be so much better
these days if priority had been given to McKay and not Smith, or McAusland and
not Foster.
But, what will be, sadly, will
be.