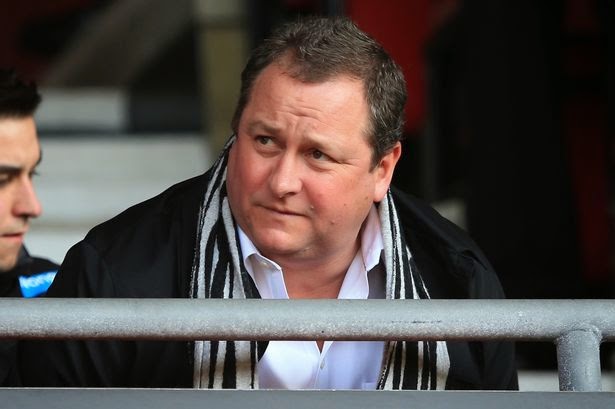 With last night’s story that
caretaker boss Kenny McDowall has stepped down via 12-months’ notice, just like
his predecessor Ally McCoist, it is yet another sorry tale in the ongoing
calamity that is Rangers Football Club.
Another day, more chaos.
And yet, the biggest story of the
past week is Sports Direct tycoon and 9.5% Rangers shareholder Mike Ashley’s
loan bid to Rangers’ board whose caveat is security over not only Ibrox & Murray Park, but the right to appoint yet more
directors to the board.
His board.
Right now, quite simply, Mike
Ashley has the Club where he wants it. Unfortunately, none of it is to the
Govan outfit’s benefit. We knew Ashley was in this for the good of Sports
Direct, and was using Rangers to further expand that brand, but the following
quote from the SD AGM on the 10th of September last year rather
proves that he will do whatever it takes to enhance his company, and the
wellbeing of the Club is secondary. When asked by Simon Bird:
“I’d like to address a question to Mr
Ashley, please. I wonder if he could explain the benefits to Sports Direct in
its relationship with Newcastle
United and Rangers.”
Ashley gave his first-ever public
comment:
“Other than to say than it’s been beneficial
to Sports Direct and therefore its shareholders, I don’t think it’s appropriate
to comment.”
When asked the reverse, he merely
referred back to this comment.
This is Mike Ashley’s biggest
problem – whatever you think of his tactics, his methods, his business acumen
and so on, his absolute and utter refusal to give any kind of transparency
regarding his actions, and therefore his unwillingness to share potential plans
are his downfall.
Rangers fans are up in arms over
the possibility of Ibrox being used as security for a loan, or indeed being
mortgaged off entirely. And this reaction is just. The problem is Ashley quite
simply will not speak and provide any reassurance that his plans for Rangers
are benevolent.
We know the man is a ruthless
businessman who is incredibly good at what he does, but his methods are
viciously dire, and his lack of transparency with his affected ‘customers’ is abhorrent.
For all we know, he genuinely has
plans to take Rangers, and Sports Direct, into the CL to gain massive matchnight
exposure for the brand, to a global audience of potentially three billion
people (based on the average 30M estimated to watch CL in the UK).
And that is all well and good,
but his complete radio silence to both Newcastle
fans and Rangers fans is his weakness.
The man just will not speak, he
will not publicly reassure fans of his positive and constructive intentions,
which only breeds fear, anxiety and contempt.
Mike Ashley is now on record as
admitting Sports Direct is his top priority, and everything else is essentially
a vehicle to drive its success. In itself that is not a catastrophe for those aforementioned
vehicles. But unless he produces a miracle, and a public statement of
reassurance for Rangers fans to the contrary, supporters can only assume the
worst.
If only you would speak, Mike.