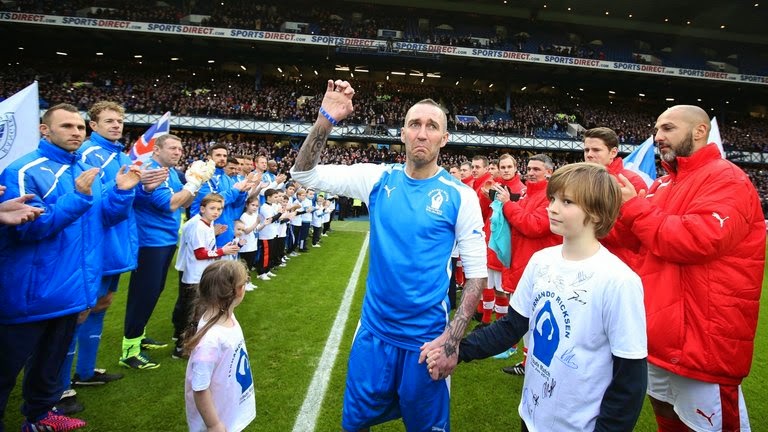 No one can deny times have been
astoundingly tough for Rangers fans in recent seasons. Trauma after trauma,
scandal after scandal, revelation upon revelation. The supporters have not even
had the product on the pitch to take our mind off the misery given it has been
beyond turgid and the Ibrox men find themselves in second place miles off
Hearts in the Championship.
Consequently yesterday’s Fernando
Ricksen Benefit Match was the first time pretty much since that opening match
at Ibrox of 2012/2013 that the stands were packed, the crowd boisterous, and
the support together, all to aid a stricken Ricksen whose brave battle with ALS
has inspired us all.

The poor man struggled and fought
his way onto the pitch, even suffering a fall in the process, but he got up
again. That fighting spirit seemed to float into the ground itself. Here was a
man, terminally ill, but despite being knocked to his backside by ill health,
with the support of the fans and his team mates, he got back to his feet and
even managed a brief smile before the occasion got to him and he shed a tear or
two.
This is bravery, and to see
Ricksen, as frail as he nevertheless is, get on with even taking the kick off,
shows courage, dignity and a never-say-die attitude.
It puts the politics, the egos,
the factions, the agendas among the support seriously into perspective. We all
sit around arguing about what is best for Rangers Football Club and go blue in
the face insisting that our way is right, and I include yours truly there.
Yet here is a humble man, further
humbled by the love and support he got out there yesterday afternoon, as over
40,000 Bears came to his aid by helping him out in his time of need.
This is the Rangers Family I grew
up with, not the fractured nonsense we have been for far too long. A family is
there for each other; sure, it argues now and again, it even falls out, but it
should not hold a grudge. The Rangers Family seemed to forget all the baggage
of recent times yesterday, and despite it being for such a serious cause, it
was thoroughly refreshing.
A mixed day of sadness, pride,
sympathy, support, love, but above all togetherness where everyone was there
for someone who needed them. Whether they attended or just bought tickets,
40,000+ supporters were there for Fernando Ricksen in some form or another, and
he is in the thoughts thousands and thousands more who either could not afford
the tickets, or are abroad.
Ultimately this was the unity
this beleaguered support has needed for some time, a meaningful cause bringing
us as one.
Thousands of Bears came from far and
wide and in their thousands to support Fernando Ricksen yesterday; maybe we can
do it for each other too.