Unless you have been sleeping underneath a large boulder, you will be aware tickets went on sale yesterday for the long-awaited Old Firm clash at Hampden in just over two weeks time. The queues at the ticket office were pretty long and the hype rather extensive.
No one would ever object to Rangers fans wanting to watch their team face off v our historic rivals, and even though Celtic fans pretend there is no Old Firm, this selection suggests otherwise:
So, in all truth, there is an Old Firm and both sets of fans are extremely excited about the first clash between the two since 2012, even if neither team are especially impressive. Tickets have as good as sold out within a day, so demand was impressive among Bears.
It is just a crying shame Fernando Ricken’s Tribute Match, which has received rather intense marketing, has failed to capture imagination in anything like the same way.

As we know Fernando was diagnosed with ALS, or Motor Neurone Disease to give it its ‘popular’ title. As such, with Rangers being his main ex-Club, a benefit match was arranged to give him financial support in his darkest hour. The proceeds will go to himself, his daughter, MND Scotland and the Rangers Charity Foundation.

Plenty of legends from both Rangers and the world of football in general have given this match their warm support and indeed the likes of Lovenkrands, Novo and even Big Boab Malcolm will be back at Ibrox playing in aid of Nando. 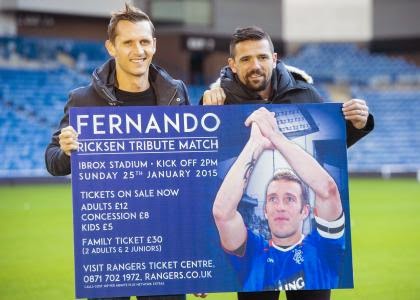 Sadly, the sales are struggling, and the great irony is fans could not get to the office quick enough when Old Firm tickets went on sale, but to help one of our own the queues have been non-existent.

50% of the Old Firm cash will go to Celtic, our mortal enemies. 100% of the Ricken match cash will go to charity, yet uptake is still low with the best-selling area of Ibrox at a mere ‘limited’ availability. The rest is ‘very good’.

I am not scolding good Bears for wanting to see the Old Firm clash. It is exciting, no doubt about that. I just wish the same enthusiasm existed for a match which is to help a cult hero ex-POTY who, during his colourful time at the Club, gave nothing less than 100% of his heart to the cause.

No one would suggest Ricksen is a legend like Greig, Struth, Laudrup or Smith, but he is one of us, and he needs us.

Celtic fans packed out Celtic Park for Petrov, and in a rare defence of their supporters they have given Ricksen 99% support and backing in his fight. There is a minority 1% vile element but they are not worth mentioning. But if they can pack out around 60,000 seats for a match which was live on TV, Bears can surely do the same for a match where all the proceeds go to charity.


Celtic fans came to their hero’s aid when he needed it, we need to do the same.

At the last estimate ticket sales were roughly no more than 15,000 which means a very empty Ibrox for such an important occasion.

Hampden will be clogged on the 1st for Celtic v Rangers, let us make sure Ibrox is close to that for Fernando.

You can buy tickets for Fernando’s match here.