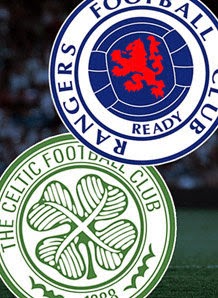 Whatever side you are on, tension
is starting to mount for this Sunday’s Old Firm encounter at Hampden. It has been three
years since Rangers met Celtic, and it is pretty safe no previous Old Firm
encounter has ever had the baggage and sub-plot level this one does.
When Rangers and Celtic were
drawn in the first Old Firm encounter for around 36 months last year, attention
globally went into fever pitch. Fans of both Rangers and Celtic often
underestimate the span their clubs have around the world in a kind of ‘inferiority’
complex, and forget just how big the Old Firm actually is – it is the most
significant football rivalry in the world today. The only ones to compete are
the Clasico and England v Scotland.
Even former Ibrox boss Graeme Souness, who was
manager in the hellish atmosphere of Galatasaray Fenerbahce and of course
played in both the Merseyside derby and Liverpool Man Utd said the following
about the Old Firm:
“It’s the biggest derby in the world by a
mile. I played in Liverpool v Everton games
and was involved in Galatasaray v Fenerbahce. There’s no comparison.”
By this point I am pretty sure
every Celtic fan reading this is foaming at the mouth screaming there is no Old
Firm, your club is dead, etc etc.
Well I am afraid to tell you
fellows that your legend Kenny Dalglish does not agree.
“How can you ever go into an Old Firm game saying you’ve nothing to
lose? Everybody has got something to lose. It won’t be a foregone conclusion.
It can’t be taken as given that anybody is going to win.”
Even the Sunday Herald trolled Celtic
fans out of £3000 by displaying that comical advert about Rangers being a new
club and there being no Old Firm right next to an article about…you guessed it,
the Old Firm.
And there is what their
ex-manager Neil Lennon said:
“Yeah, I know there’s a debate that it
is not Rangers, it’s a newco, this that and the other. Listen when it comes to Sunday and the stadium is packed, people will
know what it is all about.
[on the ad] It is what those Celtic fans believe so I’m not going to
shoot that one down. They have their own views, they’ve done a detailed study
of it.
Rangers fans will argue the case the other way but like I say once it
comes to the League Cup semi-final on Sunday and that stadium is absolutely rocking it will be back to Celtic and
Rangers as we all know it.
Anything can happen in a derby but if Celtic play as well as they can then
they should be comfortable winners.”
Dalglish and Lennon showing some
absolute sense about Rangers.
The fact is, there is an Old
Firm, and while Rangers do not go into Sunday’s encounter as
favourites, the fact Celtic fans have snapped up their allocation and will
attend Sunday’s Old Firm match in their thousands suggests they do believe it
is an Old Firm match and it is Rangers from Ibrox.
Then there is the Celtic
supporter who famously had his ticket thieved by fellow fans – all so desperate
to attend this match that they are willing to steal from each other.
Now, I must confess there are a
lot of Celtic fans who actually do miss Rangers, concede we are the same Club
and there is an Old Firm in existence as there always was. This article is in
no way criticising you individuals, you are being sensible and reasonable.
It is the ones who fork out four
figures to deny what UEFA, FIFA, the law, the SPFL etc etc have confirmed. It
is the ones who are embarrassing others into tweeting disbelief at the idiocy
of their fellow fans for carrying out such an act.
The fact is this; some Celtic
fans will pretend they do not care about Sunday’s Old Firm match – they even
deny it is one, but deep down every Celtic supporter is aching their side to
beat Rangers.
And that is the reality. We are
Rangers, We Are the People, we are still here, and there is not a single thing
you guys can do about it.
Bring on Sunday – even though
Rangers will almost certainly lose, the occasion is going to be astounding.