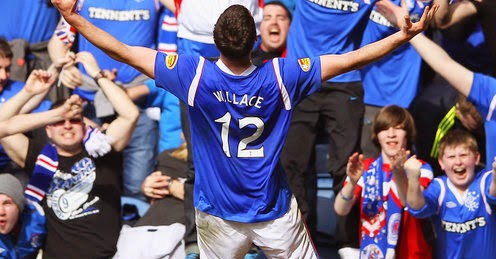 On paper it has ‘massacre’
written all over it. Rangers, who have not beaten a side of real quality since
they overcame Celtic 3-2 in 2012, face a Celtic side who have strolled
continuously to the SPL title in the Ibrox outfit’s absence.
Rangers, whose current form is
nothing short of abysmal, whose squad is extremely poor for its supposed ‘on
paper’ quality, have effectively no management either.
Caretaker boss Kenny McDowall has
already handed in his notice and is waiting to be placed on Gardening Leave,
leaving the Club effectively rudderless.
All this while the off-field
nonsense continues to rumble in the background, creating unneeded distractions
which have clearly, to an extent anyway, affected the players on the pitch;
players who are being mismanaged as it is by McDowall who never wanted this job
in the first place.
And yet…
On paper Rangers have no chance.
The squad is out of form and morale is on the floor. But on the pitch, with the
unpredictability of an Old Firm encounter always prevalent, with the right
selection, could a gigantic upset take place?
A huge weakness for Rangers has
been defence. The constant selection of the atrocious McCulloch and Foster have
helped weaken the back line and better teams (and worse ones) have taken
regular advantage of it.
The midfield has had no bite or
presence, and there has barely been an ounce of creativity to feed the
forwards.
There is nothing to lose in this
match, Rangers are expected to be defeated, so I would strongly recommend a bit
of a gamble in terms of selection to give the Govan men a bit of a chance.
Simonsen, naturally, will be in
goal. No Bell
through injury so that one selects itself.
But defence…Faure as right back
would give protection that Foster struggles to on his own – the young French has
not let his side down when played, and has a good sense of position. Left back
obviously would be Wallace.
Central defence? Zaliukas and
McGregor, the best defence Rangers have and naturally the one never given a
chance. Zaliukas is fit again, McGregor has been excellent this season, and it
would be the best possible pairing McDowall could select.
Midfield? This is where things
get interesting. Drop both Hutton and Black and put McCulloch there. He cannot
defend but he does have dig and can pass the wall – if he has to play, and in
all honesty our midfield options are slim pickings, DM is probably the most
productive place he can be deployed. This will free Law up to express himself
in a way he has rarely been able to with Black or Hutton.
The left wing: Smith. The right
wing: Foster. Give Wallace & Faure the protection of two wing backs in
front of them respectively, both of whom can get forward effectively. Smith is
especially good with set piece delivery, and Foster’s pace can cause problems
for anyone.
And up front, Miller and Boyd –
two guys who know exactly what the Old Firm is about.
Some reading this might think ‘6
defenders’ and argue it is no better than what McDowall would do, that it is
turgid and stale, and I can entirely see that point. But Rangers would have 6
players who have experienced the chaos of the Old Firm and that experience
would be vital v Celtic who have seven players in their squad (Commons, Kayal, Stokes,
Mulgrew, Brown, Matthews and Izaguirre) with similar experience, albeit only
four featured v Ross
County (some injured, some frozen out, some leaving).
And the truth is (as if I require
to point it out) Rangers do not have an astounding attack with lots of quality
to choose from; this match does have to be set up to contain Celtic, with
Miller & Foster’s pace being used in a counter.
Rangers will not dominate this match,
but they can win it. It requires total concentration, a bit of luck, and a team
playing and fighting for each other. It also desperately requires the personnel
shift I have proposed because the side as it currently resides will be crushed,
especially that McCulloch selection in defence.
Make a few tweaks Kenny and a win
is possible. Not probable, but possible.