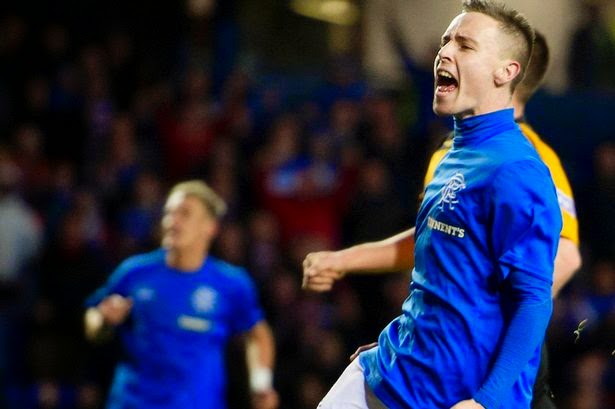 The biggest squad dilemma Ally
McCoist had in early summer of 2012 following the exodus was thus:
Rely on youth players already at
the Club around which to build a team for long term and the future.
Or:
Sign in SPL-quality players to
‘guarantee’ swift promotion through the lower tiers of Scottish football and a
return to the summit as soon as possible.
McCoist is regularly castigated
for choosing the latter, for not initiating a plan for developing the cream of
the young crop at Ibrox, thereby building a team for the future who would have
grown together, matured together, and by the time Rangers were firmly
established back in the top flight the team would be an excellent close-knit
group of players who could read each others’ games.
Many point to two examples of the
success of doing this; Beckham’s United and Xavi’s Barcelona.
The class of ’94 at Old Trafford
basically saw a core of young players, famously castigated by Alan Hansen,
prioritised by Sir Alex, who went onto win the league. They were endowed with
Giggs, Scholes, Beckham, Butt, and the Neville brothers, to name 6.
Meanwhile over at the Camp Nou
the majority of the players which have developed an amazing dynasty (only now
starting to unravel) for the Catalonians were youth players, the likes of Xavi,
Iniesta, Pedro, Busquets, Puyol, and of course Messi.
However, there are examples where
a crop of young players does not make the grade – Liverpool this season are a
classic example, where manager Brendan Rodgers decided to go for young players (admittedly via signing them from other clubs) with
potential, such as Lallana, Allen, Markovic, Alberto, Coutinho, Balotelli et
al, and the team could not have performed less, despite the quality these
players appeared capable of at their previous clubs.
So, we have the dilemma again –
youth, or SPL quality?
Fact is when Rangers found
themselves in Div 3, fans were heartbroken at the entire first-team squad
leaving, and it is easy to say in hindsight ‘we should have built for the
future’ but it is only too vivid to recall how relieved supporters were when
guys like Ian Black, David Templeton, and Francisco Sandaza were joining. Sure,
they were hardly Xavi and Iniesta but given the standard the Club were now
playing at, these players were welcomed like heroes.
Furthermore, fans rejoiced as
washed-out guys like Lee McCulloch and Neil Alexander remained, and not exactly
a spring-chicken Lee Wallace chose to stay on too.
Now we look back in hindsight and
complain that we did not put together a youth setup and build a team for the
future. But how could we know we would get a Barcelona
or a Man Utd as opposed to the shambles Liverpool
have ended up with.
Furthermore, a Utd or Barca is a rare gift indeed – to have a crop of top class youth at once is a once-in-a-lifetime privilege, even a good group is hardly regular. By having a group of young players does not automatically make them the salvation of the Club.
The problem with this nostalgia
trip is it is based heavily on mental constructs of how good these youth
players Rangers had actually were/are. In our minds we can see an incredible
young team of promise, slickly passing the ball back and forth, reading each
others’ intents and producing wonderful football. But in reality, to the naked
eye, the only two players who really impressed that did not get a prolonged
chance were Kyle McAusland & Barrie McKay.
All the rest were completely
underwhelming in their brief forays to the first team; players like Robbie
Crawford, Charlie Telfer, Scott Gallacher, Luca Gasparotto, Andrew Mitchell,
Chris Hegarty, Darren Cole, Kyle Hutton, Ross Perry and so on and so forth.
Calum Gallagher was very impressive on his first full start but went quiet very
quickly thereafter.
It is easy to look back and say
‘these players should have been given a chance’ – but the problem is most of
them truly were, and just did not make the grade.
Now, I am not condoning McCoist’s
abandonment of youth, nor do I strictly agree with him that youth players would
not have won the third division; but I do give him a rare piece of backing that
fans ached for decent quality at Ibrox, and if McCoist just simply had not
signed anyone, and used youth, then the squad would have been inexperienced and
threadbare. Had it then failed to win the third division he would have received
criticism from every angle for not signing new players and failing to realise
these youth products were not good enough.
McCoist had to make a choice. Go
with youth, which was a huge gamble, or sign experience and quality who would
guarantee League 1 football the following year.
He chose the latter, and when you
look at how poor some clubs have become for relying on youth, his choice is
almost understandable.