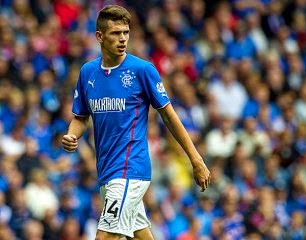 “We have got boys out on loan and as a staff
we will sit down and decide whether we are going to bring anyone back or not. There
have been a few boys who have come though in the last few years but obviously
it is a big step for these lads to make.
We thought at the start of the season that it would be beneficial if we
sent a few of them out on loan. They had a great season with the under-20s last
year and the reports that we have had back have been very positive. So
hopefully they will come back ready to battle for a place in the first team.
It’s never easy for young boys to play at the Old Firm. But we thought
it would be better for them to go out and play against boys of a higher level
than they have played against before.
It would toughen them up, as they say, and then hopefully make them
better players when they come back. We’ve been out watching them and they are
doing well so hopefully that will benefit them in the long run.”
-Gordon Durie, Rangers assistant
manager, 26th December 2014
Already, positive signs under the
new regime that progression may be possible. Manager Kenny McDowall previously
stated everything McCoist did was with his backing, but this latest development
sheds a potentially different light on that.
It may be coincidence that the
regime has changed, and that these discussions were going to take place in any
case, but the suspicion is that the McCoist regime was not pro-youth and that
these players’ loans would just have been extended from next month.
Jukebox’s confirmation that Rangers
are seriously looking at bringing these players back is an excellent sign of
the progress this Rangers team and squad need to make to perform. Having the
likes of McKay, McAusland, Gallagher and Gasparotto, to name just four, back in
the squad and vying for first-team places is the direction the Club needs to go
in.
Comments to my previous article,
about McCoist abandoning youth, were correct to assert that the priority is a
blend of youth and experience, and that McCoist did not so much abandon youth
as fail to give them a chance in the first place. Semantically speaking that is
what I was trying to convey in said article but the message may have been lost.
No matter, it appears Durie,
McDowall and McCulloch are intending to give these promising players a chance,
players who simply were not afforded that privilege under McCoist.
A Rangers of Bell, McAusland,
McGregor, Zaliukas, Wallace, Aird, Law, Macleod, McKay, Gallagher and Clark
really is a rather inspiring team to look at.
Furthermore if McCulloch has real
pretentions about acting in the best interests of the team he can remove
himself from that first XI and concentrate on coaching and being a backup sub
if needed.
He is now player/coach – he has
the power to not select himself. If he continues to play ahead of simply better
players, it is plain to see he is acting in his own interests and not that of
Rangers. Lee Wallace has plainly earned the team captaincy, it is about time he
was furnished with it.
But this is academic – it appears
times are a changing at Ibrox, and it is good to see.
Now, if we could just sort the
off-field stuff too…