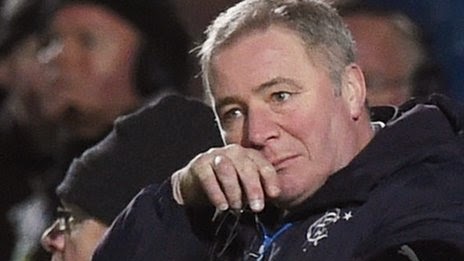 News broke yesterday in the
mid-afternoon of Ally McCoist’s resignation. Immediate responses from fans were
generally of the praiseworthy kind, in the sense that McCoist had appeared to
know finally the game was up and had walked away without the ransom of a
severance package. I criticised his apparent refusal to do this in a previous
blog, comparing it with Paul Le Guen’s willingness to do the right thing and
waive his £2M pay-off having been fired by Sir David Murray.
Consequently, the news he had
quit, therefore waiving the fee, brought out a huge deal of praise from myself
and other fans, proving once and for all that Ally does care about the Club
above all else.
Only…the rest of the day proved
that this was all a great big media stunt.
Ally McCoist, master manipulator
of the fans, of the press and of those in the sport itself, once again had
played a blinder. In fact, his sleight of hand even managed to get fans’ ire
off his back, and onto the players. Knowing full well this news would
completely destabilise preparation going into the visit to Palmerston,
McCoist’s Rangers were miserable and fully deserving of the defeat.
Only this time, instead of
complaining about McCulloch in defence, or McGregor at RB, or Mohsni starting
again, or the useless Shiels starting at all, or Daly up front, or Foster at
LB, all of which were McCoist decisions, fans instead solely blamed the
players.
Sure, they are the ones who go
out there and play, but who is the guy who is putting the square pegs in the
round holes, and reserving special holes for his favourite pegs?
The same man who has managed to
swindle his way into playing the victim while he sits there on the highest wage
of anyone at Ibrox, mismanaging the team week after week.
Because, of course, McCoist has
not resigned. He has handed in a year’s notice, meaning Rangers’ board has five
options:
1: Pay him off a severance
package of around £400,000 – which it cannot afford to do.
2: Pay him off an ‘undisclosed’
settlement to his satisfaction, which will be similar in value to the above.
3: Pay off his entire 12 month
wage now – £850,000. Impossible to do.
4: Put him on gardening leave,
which will cost the remainder of his current deal – around £550,000.
5: Just let him get on with it.
None of these are good options
for anyone other than McCoist – he still gets his money no matter what, and
ultimately he either stays in the job, haplessly bumbling from one calamity to
the next while being paid a near cool million pounds for it, or he is paid off
quick – and he knows the board does not have the money to do the latter.
Meanwhile he is now Super Ally
again, with the blame firmly at the foot of the players. Players who, in the
past two weeks, have been canvassing support for him and had been castigated by
fans for it:
Jon Daly; regaling us with the
tale of how McCoist attended his father’s funeral.
Darren McGregor; telling us
McCoist gave him the chance to play for Rangers and of his gratefulness for
this opportunity.
Nicky Law; blaming his fellow
players and removing all responsibility from Ally.
And McCoist, post-match once
again laid every inch of blame on those players as well. The guy playing
Mohsni, Shiels, Daly, and McCulloch, Foster and McGregor out of position is now
the hero, the victim, the one who is the innocent in all this.
Did the players produce yesterday
night? No, they did not. But given the titanic upset to the preparation, did we
expect a glorious night of football – did we expect Ally to have organised his
troops impeccably? No.
That Rangers lost is no surprise,
and that McCoist is now blameless in some eyes is remarkable testament to his
canny ability to play people against each other and make others apportion blame
to everyone other than him.
His skill in manipulation is
outstanding, and once again McCoist has pulled the wool over everyone’s eyes
and holds all the cards.