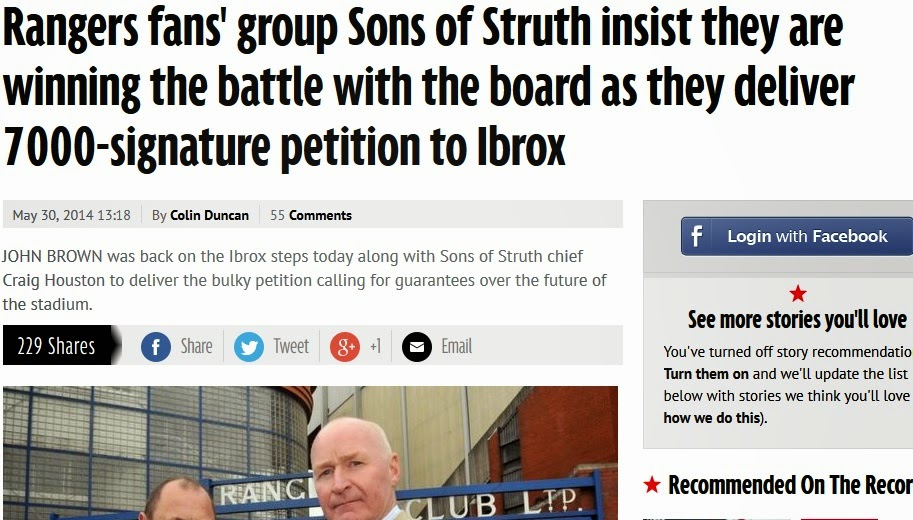 In this article from December 2012, I examined Scotland’s main
broadcast media and found that there was little hard evidence to suggest any
kind of bias against Rangers. Sure, there are individuals in these
organisations who dislike the club, but that applies to all walks of life.
Generally my investigation found that, BBC and Clyde
aside, there was little anti-Rangers bias in ESPN (as it was then, now BT), Sky
and STV.
However, I deliberately avoided
the printed press as that is a whole other animal.
In Scotland, there are effectively six
main tabloids (no point discussing broadsheets, their circulation and sales are
dwarfed by the tabloids) and these are:
Glasgow’s Evening Times and The Daily Record.
Edinburgh’s Evening News & The Scotsman
The Scottish edition of the UK’s largest
newspaper, The Sun.
And lastly The Herald.
Some would debate The Scotsman
and Herald as broadsheets, but this is a moot debate anyway as this article
today is focusing on specific red tops, namely the Daily Record and the
Scottish Sun.
These two scurrilous publications
have long-since abandoned any ideals of printing facts, or prioriting
journalistic integrity, but have instead gone the route of tabloid titillation,
attention-seeking and outright lies.
Once upon a time a tabloid was,
with all due respect to its readership, targeted at the less intellectually
endowed working classes of the land, an easy-to-read presentation of the news
that could keep the working man and woman up to speed with events around them.
These were not Eton or St Andrews graduates,
they were honest, hardworking folks who just wanted an aesthetically pleasing
and simple way of interpreting the facts without being bogged down by vast
prose and extensive vocabulary. They wanted it called a ‘rat killer’ and not a
‘rodent exterminator’.
However, something changed in
’89. When the London-based Sun went ahead with its atrocious ‘The Truth’
edition following the Hillsbrough Disaster, it seemed to give license to its
partners in the tabloid field to produce whatever sold newspapers. Given the
Sun is the wealthiest part of News International (Or News UK as it is
known these days), they could get away with the lies as they could afford to be
sued for millions and even beaten. The Sun is valued roughly in the region of
£1,000,000,000 which is its yearly turnover. Combined with its partner papers
News UK
is worth $1.61B in revenue.
We are talking serious cash here.
Ok, I have rambled enough on about facts and figures, what is the relevance to
Rangers?
Most of you reading this will probably
have a suspicion where I am going with this.
Put simply, over the past decade
there has been a tangible amount of evidence to suggest Rangers’ biggest two
enemies in the printed press by far are The Sun and the Daily Record. While the
proof was scratchy and inconsistent up till February 2012, since that fateful
month these newspapers have had a field day, printing anti-Rangers article
after anti-Rangers article. The Club has been one of the most profitable
stories in Scottish history for these publications; all either of them has to
do is print a murky story about Rangers and their circulation and sales numbers
peak higher.
Rangers are an easy target and a
borderline licence for these papers to print money. Indeed, Rangers fans have
frequently suggested boycotting them completely, with one recent incident
involving infamous anti-Rangers blogger Phil Mac Giolla Bhain and the Sun’s
desire to print a serialisation of his fantasy novel about how the club
self-destructed (well, at least the title of his book avoids the name ‘Sevco’
unlike his constant references to the Club on Twitter…).
This outcry from fans actually
persuaded the paper to change its mind for once, but its interest in the book
highlights how easily these tabloids target the Club for sensational stories,
with zero interest in the factuality of the content.
Indeed, any ‘aspiring’ journalist
who targets these papers to be printed in is as much an enemy of Rangers as
Bhain is – if you get printed in the enemy, you are the enemy.
And that applies just as much to
the Daily Record, who have used Rangers’ woes to line their pockets for a very
long time, but more intensely during the 2012- present period. It was with
great sadness that captain Lee McCulloch chose The Record’s Keith Jackson to
write his autobiography, and even more depressing the paper profited from
serialising it. Jackson
lined his pockets for writing it, the paper lined its for printing it.
Indeed, just like The Sun, fans
have suggested boycotting The Record, and James Traynor effectively did,
quitting his post with a veiled stab at the paper and other press outlets:
“My conscience won’t allow me to stay in our
profession. The kind of journalism needed by the country, never mind sport, no
longer exists in enough of the media outlets.”
We have hard evidence that The
Record and The Sun, especially, are full of lies, completely lacking integrity,
and purely exist to make money, not report the truth.
But then there is this: 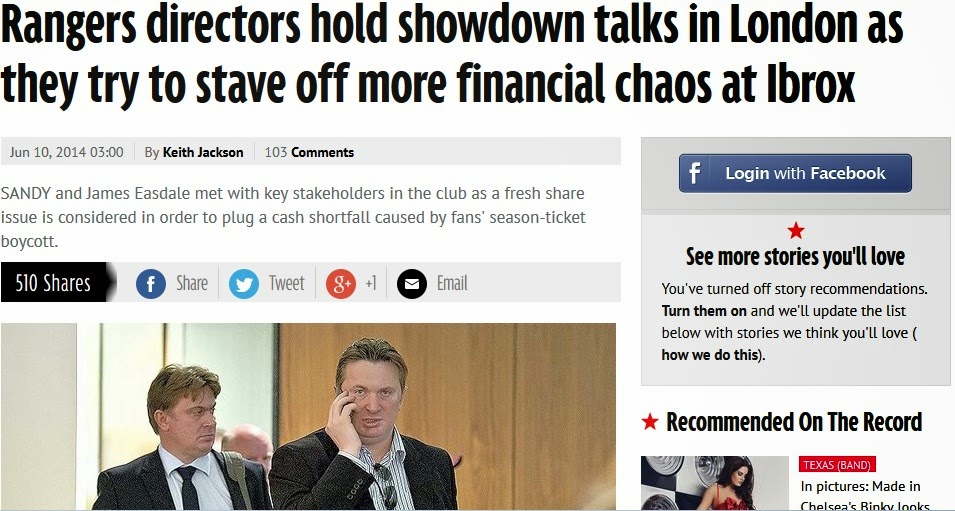 It is quite flabbergasting that
Rangers’ fan group ‘Sons of Struth’ are now using The Record as their
mouthpiece. Not intent on viral marketing, they are quite happy to ‘get into
bed’ with a well-established Club enemy and serial liar in order to further
destabilise the club they profess to love.
Going back even a year every fan
to a man and woman would have heartily condemned The Sun and The Daily Record,
including John Brown, Chris Graham and Craig Houston. And yet now these
individuals are quite happy to help profit their own enemy to hurt their Club?
This is not me even protesting
their agenda – I have done plenty of that elsewhere, but the fact they are
pushing said agenda through an agency we all despise in unity. Or are supposed
to.
And there is no hypocrisy here, I
have condemned the Easdales, Murrays et al for using another enemy, the BBC, to
spread messages too. Difference is BBC relies on license money, not hits or
newspaper sales. The more attention you give the Record or the Sun, the richer
they get.
And the more they will hurt you
in the future.
Think about what you are doing.