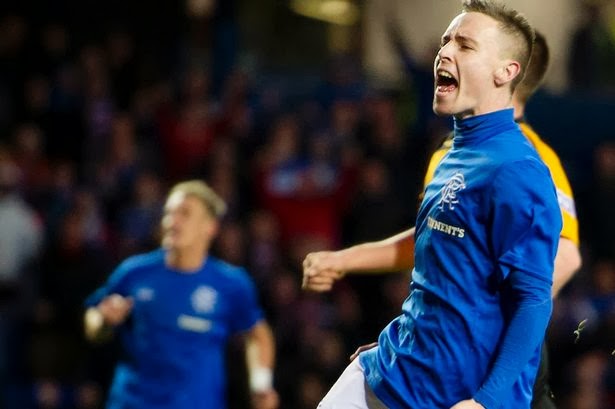 Last season this blog contained
an entry on the 3rd of December regaling over the quality of Barrie McKay. He
showed such impressive promise that building the side around him this season
seemed a no-brainer.
Indeed, as early as his debut in
the victory over Brechin in the Ramsden’s Cup in July 2012 it was pretty plain
from the word go that McKay was a special talent, with culture, composure, and
vision far beyond his tender age of 18.
Bizarrely, after an incredibly
bright start to his senior career at Ibrox, McKay was inexplicably dropped.
Many fans put this down to ‘managing’ a youngster and not wanting to burn him
out, yet similarly-aged Lewis MacLeod was a permanent fixture in the side.
McKay did return to the team, but
despite amassing 41 appearances for Rangers last term, only 16 were as a
starter and he only completed the full 90 minutes on 9 occasions. The rest were
either substitute appearances, or he was hauled off before the final whistle.
Despite all that promise, all the
high hopes, this season McKay has fared even worse; the hope had been 2012/2013
was about ‘blooding him in’ and managing him, for him to then take his rightful
place on the left wing and become a regular starter. Sadly it has gone the
other way, and from being cast to the bench (He got on 3 times) on a
near-regular basis, or not involved with the first-team at all, McKay suffered
the ultimate ignominy when he was then ditched to the U20’s.
The final insult has now been
completed by his loaning to Morton.
Even the official Rangers website
appears to raise a metaphoric eyebrow at McKay’s treatment;
“Manager Ally
McCoist has used McKay far less than many people expected.”
What on earth does McCoist have
against McKay? Instead of just waiting till January and letting him move to
another club for a loan till the end of the season, or even using him on the
bench in the senior team, Ally seems to have permanently got the hump over
McKay and refuses to let his career flourish.
The official line is there will
be no further U20 matches involving Gordon Durie’s team till the 21st of
January, but in that case as mentioned why not use him on the bench?
If it was any other player like
Cole or Hutton who either performed poorly or simply conducted themselves
poorly, I would understand McCoist’s motives. But along with fellow month-long
loanees Gasparotto and McCausland, McKay is one of the more/most promising
youngsters at the club and yet has been banished away elsewhere.
In Rangers’ current situation,
young, inexpensive talented players are manna from heaven – low wage, decent
quality and more than able at the level the club is at. Yet in the starting XI
now only MacLeod seems to be in favour. Even Fraser Aird is in and out and
Robbie Crawford gets the occasional look-in.
Furthermore to add insult to
injury, McCoist accepts the club has to make cuts, but wants to sign big shiny
new players in January (why?!) and ships out the young and promising players
who could seriously help with overheads while keeping the club playing at a
decent level.
This is full of contradictions
and helps no one.
This is not a knee-jerk article
in response to the Stranraer result – a draw after 15 wins is no crisis and it
would be a nonsense to make any conclusions from it. No, instead it is genuine
frustration over the rather dubious handling of McKay and other fine young
players who could help the club along with the more experienced players.
And by ‘help’ I mean as much
regarding the club’s costs as its performances.