Home Rangers Whose Press is it Anyway – When is a Riot Not a... 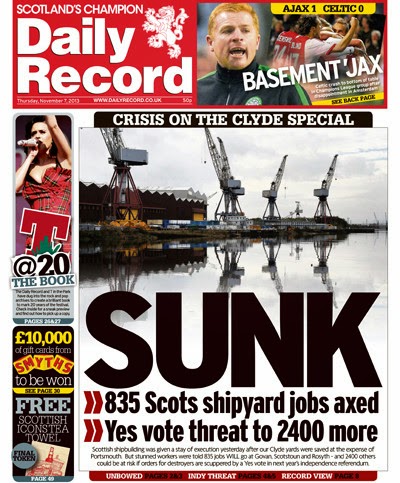 I have to say I have never been
one for paranoia and conspiracy tales, always willing to accept apparent bias
as ‘just a way of selling papers’, for example. And that has a distinct element
of truth – historically whoever the biggest target is (or is most successful)
generally gets more scrutiny from the press.
Negative stories about the Old
Firm sell newspapers remarkably well, particularly in Western
Scotland, with Celtic’s famous cracked crest shifting many more
Daily Records and Suns than normal, and Rangers’ fall into the Third Division
being closely tracked to sell those papers a few extra of late.
However, there has been, in
recent years, a feeling among Rangers fans that any impartial tabloid desire to
sell copies has waned, in favour of outright favouring Celtic due to Rangers’
recent travails.
This sounds like paranoia again,
but is it?
In May 2008, Rangers famously
travelled to Manchester
to contest the UEFA Cup final, an occasion which was marred by ‘riots’. In
simple terms a clutch of around 200 apparent Rangers fans (of 200,000 fans in
total) stormed the city and created damage and chaos, which led to riot police
going in to restore order. Around 50 arrests were made and convictions
achieved.
The media in Scotland was
absolutely peppered with this story, with the Daily Record, Scottish Sun and
most other outlets headlining with it as their front cover, while the broadcast
media focused similarly heavily from STV to the BBC.
It was a disgraceful episode, one
true Rangers fans were ashamed of seeing, and the club themselves condemned the
rioters;
“Those scenes obviously are dreadful and
I’ve seen them myself and we have been informed…that those scenes were caused
by supporters that don’t normally attach themselves to our support. Therefore
we’re extremely disappointed and we’ll do everything we possibly can to help Manchester Police find out
who those perpetrators are.”
True Rangers supporters went to Manchester to support
their club, and a small pocket of hooligans attached themselves to this. But
the point is the Ibrox club recognised it had happened, and condemned it vigorously.
However, as we know, Celtic
travelled to Amsterdam
on Wednesday and engaged in similar riots. It does not matter who was guilty,
who was innocent; the point is that tangibly one half of the Old Firm again
travelled to another city and was involved in violent clashes with police (and
other supporters).
However, the point of this blog
piece is to highlight that not one of the tabloids covered it on either their
front page or back.
Here is the Daily Record’s front
cover:

And here is the Scottish Sun’s: 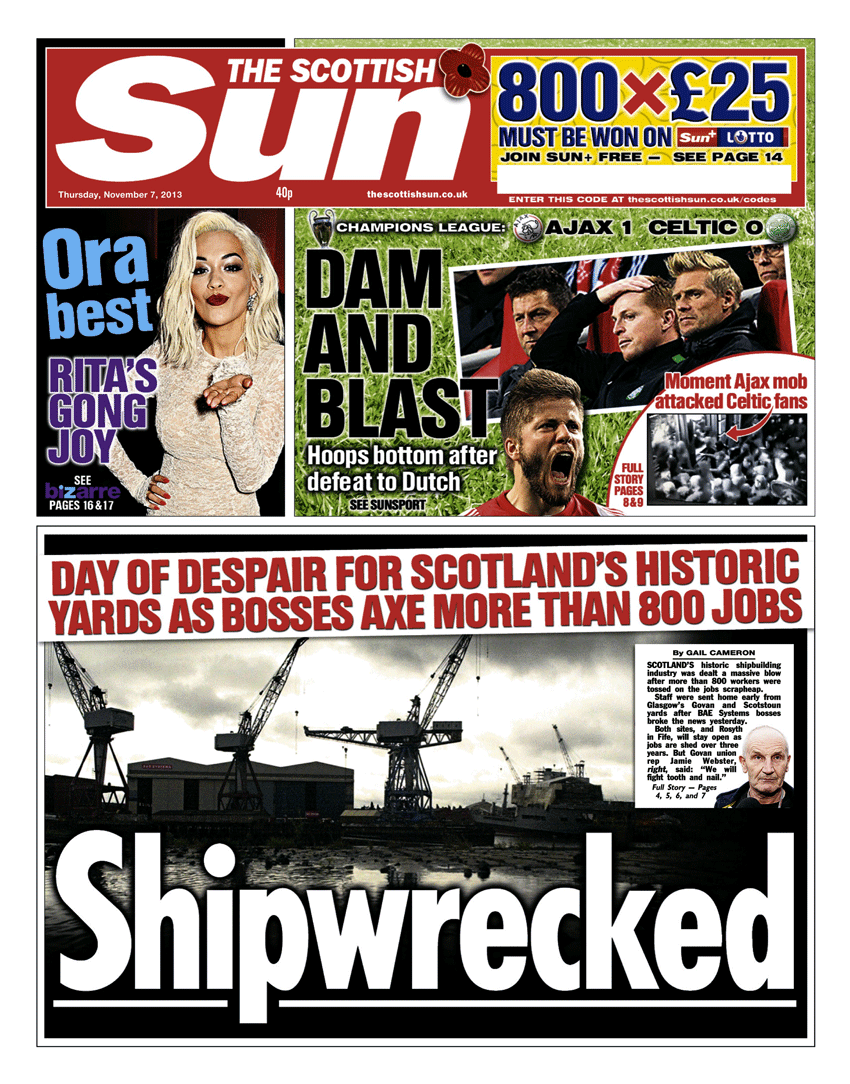 Not a single mention of any
conflicts, except a small inset blaming the Ajax supporters who attacked the Celtic fans
in a pub. Which is not to condone that as
the attack from the Dutch looked unprovoked and shameful, and turned my
stomach.
However, there is a remarkable
difference in the tone here, because, as is fact, negative Old Firm stories
sell papers by the boatload, and here was a chance for the Scottish red tops to
shift many thousands more. Yet they ignored the Celtic riots entirely and
focused on the shipyard story. A perfectly valid story of course, but the
absence of any condemnation of the behaviour of Celtic fans, in contrast to the
garish front pages in 2008 where a minority of Rangers hooligans were
rightfully castigated is a bewildering difference in media context.
Two halves of the Old Firm, both
involved in rioting and clashes with police, but Rangers portrayed as the bad
guys in 2008 while Celtic fans were exclusively the victims and their actions
completely ignored on Thursday.
I distance myself from paranoia,
from saying they are out to get us. But even I have to question the motives of
certain areas of the press to effectively whitewash the Celtic riots. Only Sky
Sports News seemed to cover it in any detail and honesty, and they are English.
Fact is both events saw around 50
fans arrested, but one was entirely ignored in Scotland, and one was not. I am not
asking for the Manchester Rangers riots to be reduced
from what they were, I am merely pointing out the Amsterdam riots were reduced from what they were.
The question is why?

NB – the early Thursday editions of the newspapers mentioned here clearly showed no mention of the Amsterdam riots (this entry was written last night), as shown by the front pages I posted. Today’s front pages, however, do indeed cover the riots and as such, while they were a day late, the main two Scottish red tops the Daily Record and Scottish Sun have now indeed covered the story. This proves my point about using these kinds of topics to sell papers, and I retract the sentiment of a conspiracy to conceal the events entirely.