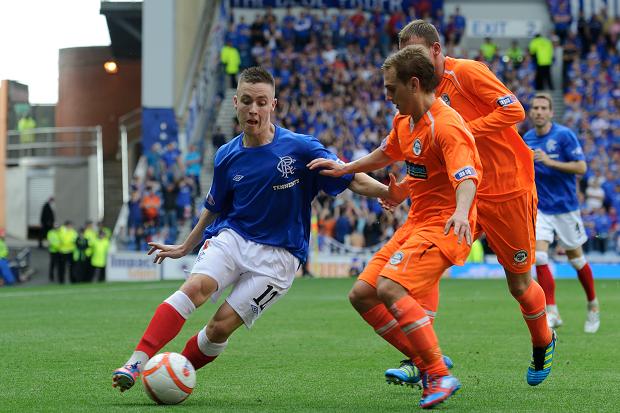 In the past decade and beyond,
the most famous Barry at Ibrox has of course been Ferguson. The former captain played for the
Govan club during two lengthy spells in Glasgow, under a total of 5 different
managers (one on two occasions); Walter Smith, Dick Advocaat, Alex McLeish,
Paul le Guen, caretaker Ian Durrant (albeit only for a week) then Walter Smith
again. He is undeniably one of the most discussed players in Rangers’ recent
history, but these days in this new era it is a different Barrie (spelling notwithstanding)
who is the name on the lips of Rangers fans.
With the staggering changes which
took place following the plunge into and exit out of administration, a sterling
talent has emerged from deep within Auchenhowie’s youth regime. While promising
young players like Lewis MacLeod, Kal Naismith and Robbie Crawford have begun
to bloom, one player has stamped his authority on the first team like no other
this season, and has blossomed magnificently.
That player is of course Barrie
McKay.
Paisley-born McKay actually began
his career at Kilmarnock in their youth ranks,
but in the summer of 2011 after 6 years in Ayrshire made the move to Rangers
aged 16. Now at a still tender 17 (a matter of weeks separate him from his 18th birthday), McKay would be the first to admit that he, like his fellow youth players, probably would not have been afforded this opportunity had the notorious Craig Whyte not plunged the club
into administration, costing Rangers so many first-team staff. This is not to
pour cold water over his ability, but merely to observe that it is very hard
even for the absolute cream of the youth crop to break into the first team when
it is a club the size of Rangers. Even the aforementioned Barry Ferguson did
not manage to appear for Rangers in the first team till he was around 20. And Ferguson’s emergence was
under ordinary circumstances. McKay’s has most certainly not.
This is what has afforded McKay
this gilt-edged opportunity, one he might not have enjoyed otherwise – with the
departures of so many senior players, an unprecedented emphasis was placed on
the youth setup and the reality faced the club that many players would be used
in the starting lineup who normally would not be given that chance.
But how McKay has taken it!
Prior to the season’s start I was
dubious as how a 17 year old would manage to break through even in the third
division. I felt his chances would be limited due to his age. How utterly wrong
I was. Manager Ally McCoist saw something in young Barrie and selected him for the club’s maiden
fixture in division 3, a trip to Brechin in the Ramsden’s Cup. It was clear
after an incredibly confident reverse floated pass, not entirely
un-Ronaldinho-esque, which evaded the entire defence and set up an attack that
McKay was potentially an utter gem.
More incredible was his level of
polish for such a young player. With pace, skill, vision, and an impressive
shot, he has taken the bull by the horns and stamped his place in the side. He even scored the club’s first-ever Third Division league goal with a fine finish at Balmoor v Peterhead. With around 8 starts this season, he has become a thoroughly justified fixture
in the squad, albeit McCoist rested him briefly for a few matches to preserve
him.
What strikes fans about McKay is
his maturity for such a young player, and the conduct he carries with him. When
fouled there is no petulance or irritated reaction, and when attacking
defenders he oozes self-belief. Sometimes it does not work out, most of the
time it does. And increasingly we are learning of his versatility – initially
featuring heavily on the left wing, McKay has featured on the right hand side
as well, showing his flexibility and ability to adapt to different formations
and requirements.
His display yesterday against Elgin City
was unquestionably the highlight of the match, with run-after-run at the
backline and an impressive ability to link up. He would have scored too but for
the post saving Elgin’s
blushes. And he gets credit for an assist at Kyle’s goal, having supplied the
corner leading directly to the finish.
He is of course, however, not the
finished article – let us not get too
carried away just yet. He does have a slight
propensity to sometimes try a little too much, and while his vision is
excellent when he uses it, now and again he does not look up.
But this is clutching at straws and nitpicking regarding such a young player, and is very unfair in itself! In my humble opinion he is the brightest prospect at both the club and in the division.He is a real talent in the making and if he can be steered correctly
by the club’s greatest ever striker then in the future this team will be built
around Barrie McKay.
David Templeton on one wing,
Barrie McKay on the other. Not bad is it?