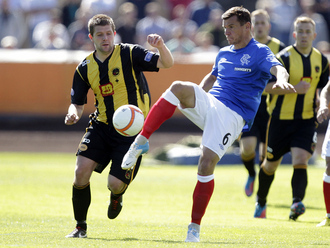 It is fair to say this refreshed Rangers squad has contracted a rather nasty case of schizophrenia. Schizophrenia is generally described as ‘split mind’, where one half of a personality is grounded and performs as it should, while the other, when initiated, becomes erratic, unreliable, and its thought processes defy reason.
That would be a reasonable summation of Rangers’ home and away form this season thus far.
Last night saw yet another comfortable victory at Ibrox over a relatively decent side in visitors Falkirk following on from a vile display in Berwick where the host team more than deserved the point they earned by full time.
Fans were irate to say the least by the end of 90 minutes on Sunday – whether the manager Ally McCoist was to blame, or the squad was, the club got it thick from the thousands of loyal fans who cried blue murder at the shameful performance the men in blue had provided. Fast-forward to last night and reaction was of a vastly more positive nature, which tends to be the case when your side has put 3 past their opponents without reply.
So, and this is the nitty-gritty; what is causing this gulf in form between home and away matches?
The 3 notable matches at Ibrox against East Stirling, Falkirk and East Fife have seen massive scores in favour of the hosts. 3-0 has been the lowest margin of victory. But something which has been glossed over slightly in the aftermath of last night’s victory was how easily manipulated Rangers’ defence was. Anestis Argyriou, Carlos Bocanegra, Emilson Cribari and Lee Wallace struggled significantly with Falkirk’s front men, particularly from balls in behind which bypassed the back 4 time and time again. With more clinical finishing, luck (they hit the post), and without Neil Alexander’s own slice of luck where he nearly fumbled into his own net, last night could have been slightly trickier than it was.
Thankfully an on-form Andy Little and a sharp brace from stalwart Lee McCulloch kept the points in Rangers’ grasp.
Poor defence at Ibrox is being glossed over with good attacking play which leads to goals.
At away grounds the home sides naturally step up their game. It is their playground and they are determined to dominate. And Berwick just about did – where the balls in behind failed to do the damage at Ibrox, possibly related to nerves in front of a bigger crowd, they are managing to do so away from home. Now-departed Kirk Broadfoot’s failure to clear a header in Brechin led to Rangers failing to clinch all 3 points in that game. Indeed, the home side led 2-1 in that match. And these defensive issues are blighting the campaign thus far.
All matches at Ibrox – easily won (overlooking that shaky defence) – all matches away – the side struggles to get a point. And we cannot even blame an under-performing Broadfoot for defensive mishaps any more. 2 new signings have failed thus far to blend in cohesively, albeit these things ‘do take time’, as is the oft-used cliché when a player fails to excel at his new club.
However, a further problem, and a significant one at that, is the staggering lack of motivation away from home from the entire team. From lumping aimless balls up top (where no target man exists unless Kevin Kyle starts) to passing mundanely around the back line, the side does not look motivated or lively on its travels.
The performance in Berwick was nearly criminal in its complete lack of interest from the away team, and nothing changed at half time despite McCoist’s furious words to ESPN’s Eilidh Barbour who nervously asked him for his opinion on the first 45. The team returned in the second half and continued on exactly as previous, and it was no surprise that Andy Little’s first half goal was cancelled out.
It is easy enough to be motivated when 50,000 fans are chanting in front of you, less so when a mere 50th of that is present at a backwater Scottish football ground. And this is a huge challenge for McCoist. He struggled to negotiate the Naismith problem last season, and while the slate is clean this time around, similar difficulties are challenging him and thus far, away from home at least, the side is not delivering.
When Elgin City visit on Sunday, rest assured the side will win comfortably. It is the following weeks and months away from home that concern. Can Ally get his side more motivated and in better form for their journeys throughout the country, or is promotion in serious doubt with far too many dropped points away from home?
Time will tell.