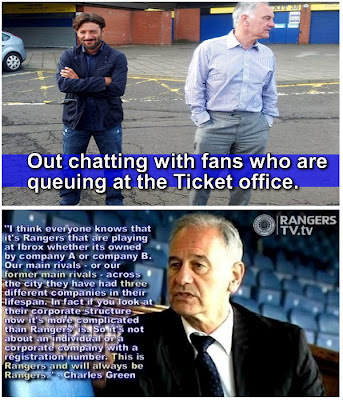 The initial question most bears asked when businessman Charles Green was heavily linked with a club takeover of Rangers was quite simply: “who?”.
A bit of background digging revealed he had been involved in football before, with a spell at English side Sheffield United in an executive role, one which had led to significant dislike for him from Blades’ fans. He had been involved with sales of top strikers such as Brian Deane for the pure purpose of raising funds, something which naturally displeases supporters; no fan wants their best players sold. The fact Green had effectively escaped United via the backdoor in the end rather led Rangers fans to be wary in the extreme of him, but despite this, administrators sold the club to Green and his consortium for a sum of £5.5M.
It has to be said, the early days of his tenure as Chief Executive Officer at Ibrox were anything but lauded by supporters. Objections were raised as to the lack of identity of his investors, plus the nature of Zeus Capital, a corporate holding firm who helped Green take Rangers over. Questions were also asked of Green himself, wondering if he was ‘another Whyte’ with nothing but malevolent intentions. Indeed, many fans quite simply wanted Green out, and using social media network Twitter and other sites, installed anti-Green avatars to sum up their objections.
When the CVA Green and the fans had depended on was rejected by the creditors, it only made matters worse. Around 1-3p in the pound was being offered, a rather miserly attempt at compensation, and unsurprisingly HMRC did not accept. The present company, Rangers PLC, consequently ended up liquidated and it only served to stoke up the anti-Green feeling among swathes of fans.
Fast-forward to the present day, and look at the photoshop images fans are now posting online:
Quite a turnaround. So what has led to the mass change in the tide of ill-feeling? It appeared to begin when Green showed up on Sky Sports News, being interviewed at Ibrox, and giving a great deal of information regarding the state of play within the club. He condemned the players who had abandoned the club, something which supporters completely agree with, and stated further information would be forthcoming over the next week. The following day, chairman Malcolm Murray released a massive statement on the official site, clarifying the names of many of the investors:
“The consortium includes, Zeus Capital, Chris Morgan, a UK-based businessman representing family trusts; Glenmuir, the renowned Scottish clothing company, Alessandro Celano of Blue Pitch Holdings, Jude Allen, Mazen Houssami, Elias Kaisar and Mr Jean Haddad.”
He also announced a great number of other comments about the club’s financial position, season tickets, league status, investment and asset ownership.
The transparency supporters had been crying out for for years was substantially arriving. Not everything could be revealed, but a great deal was.
The big marquee moment, however, which seemed to categorically turn the tide and inspire the majority of supporters to be willing to trust him was when he very accurately described the decision to reject the newco from the SPL as one based on ‘bigotry’. Someone within the club was stating the hate in Scotland for all to see, and those outside the club did not like it one bit. Indeed, so infuriated and irked were many by his bold comment that they caked it in religious values and deluded themselves into believing he was making some kind of comment about religious sectarianism. Clearly he was not, clearly his comment held water about the fact Scottish football hates Rangers, and supporters of the club were delighted to see someone as high up in his position make a comment as close to the bone as this was. Bigotry does not have to be religious, not unless you decide it should be.
And the latest episodes in supporters’ increasing good feeling about Green:
No one would pretend Charles Green is ‘one of us’. He is not. He is a businessman who was approached by investors who wished to take over the club. He has withstood pathetic takeover attempts from club legends who came in with feeble bids (or no bid at all), and who were never heard from again.
But the simple fact is Charles Green is doing all the right things to steer this club. With the help of Ally McCoist, with whom any differences are now clearly a thing of the past, Green is running the club in the way it needs to be run right now. And he is being supported by the fans, delighted to see two men defending the club in face of extreme adversity; one a club legend who has defied superlatives, another a hard-working businessman who says it like it is and does not suffer fools gladly.
This is not to say we all implicitly trust Green – we do not; he could still turn out a bad ‘un. But he is slowly earning our trust now, and in time, with more good actions, he will gain more.