Home Rangers The Future of the SPL is in the Sky. 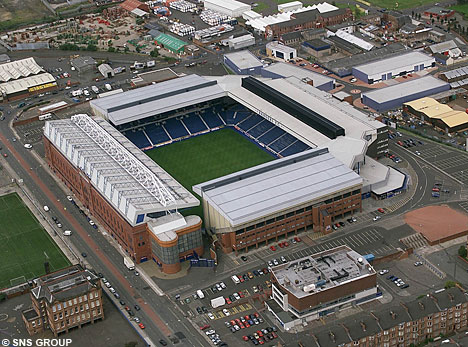 So, after a quite torrid week which saw a CVA agreement rejected, the beginning of the liquidation of Rangers PLC, Rino Gattuso choosing to sign for Swiss side FC Sion, and Charles Green’s consortium gaining control of the newly-formed ‘The Rangers Football Club’, it is safe to say the rollercoaster that is Ibrox continues to throw up more twists and turns than a plate of spaghetti.

The situation was compounded with the 25th hour news that, only hours before Charles Green became CEO, club legend Walter Smith revealed he was fronting a new consortium backed by near-billionaire Jim McColl which hoped to pinch the club from under Green’s nose. That did not happen, and Green’s consortium seized the club, with Smith’s consortium now being invited to discuss their intentions with those in control at the club.
However, an even more immediate and pressing matter awaits Rangers, and that is the bread and butter of the league the club plies its trade in. With ‘Rangers PLC’ facing liquidation and subsequent oblivion, ‘The Rangers Football Club’, the newco replacing it, does not currently have a license to play in any professional football league. That frank issue is now the main topic of consideration in Scottish football, and the SPL’s member clubs (all 12) will now vote in the next 2 weeks or so regarding whether or not they wish this new-formed Rangers to return to their league. In order to successfully grant access, the SPL must receive an 8-4 majority or better, a vote which includes Rangers themselves. This means, simply, that 7 other clubs are required to vote in favour of Rangers for the club to be permitted to play in the SPL.
There is much debate about the intentions of the various clubs, with Aberdeen, Dundee Utd and Celtic all apparently favouring a ‘no’ vote, while others are less clear. However, there is a question of where Rangers, as a club and its support, actually want to be.
To investigate fan opinion, polls were run on Rangers Media here and Gersnet here, along with Twitter. Interestingly, the overwhelming majority (36 to 13 at the time of writing and probably higher now) of votes favoured the club losing the vote and going down 3 divisions to the Scottish Football League’s Division 3. Admittedly questions were also raised about the likelihood of sanctions should the SPL grant the club entry, with certain individuals choosing Division 3 over more punishment, but the simple bare fact is that on 3 different mediums, the clear majority of votes favoured a massive step down in leagues in apparent defiance against those who have punished the club in recent times.
Sky TV is the big player regarding the outcome of this vote. If Rangers remain in the SPL, they will continue to honour the deal hammered out in 2009, one which has become more lucrative in the following years and is currently worth around £110M. This will continue to support the league, ploughing millions into it which will give the cash the clubs in the league desperately need to stay afloat. However, the clause that always existed in this deal involved both halves of the Old Firm being part of the league, and Sky have threatened to walk away from it in light of recent events. Quite simply this would kill the SPL. No other broadcaster in the UK can afford the level of licensing Sky can, with the possible exclusion of their SPL partner ESPN. However, it is unclear if the conditions of the deal allow ESPN to take over exclusively should Sky depart.
The broadcast giant has allegedly proposed a compromise, where they will continue to fund the SPL for one year if Rangers are demoted to Division One, with the presumption the Govan men will be promoted immediately hence their return to the SPL one year later and the resumption of business as normal. This is, however, dissatisfying to Rangers supporters, who feel without Rangers the SPL should suffer explicitly, in light of the sanctions the authorities wish to hand out, have handed out, and potentially could hand out to the club on top of those already being suffered. Furthermore, it would still fund those clubs, who voted ‘no’ to Rangers, with Sky money the Rangers faithful feel is entirely undeserved. Hence the suggestion of the compromise is not favoured by any fans.
Whatever the outcome of this vote, it is a pivotal moment in the history of Scottish football. If Rangers are granted access, then the money continues to flow but the bad blood which has developed between the rest of the league and Rangers in recent months spills yet further, plus extra sanctions may await. If it is a no vote, the SPL may well die without Sky, and smaller clubs in the top flight would quite possibly go the way of Rangers themselves, if not worse, ala Gretna. As for the compromise, it seems designed to keep everyone happy apart from Rangers and their supporters – and as such is quite possibly the most likely outcome.
Perhaps the club should accept the compromise and deliberately not get promoted!