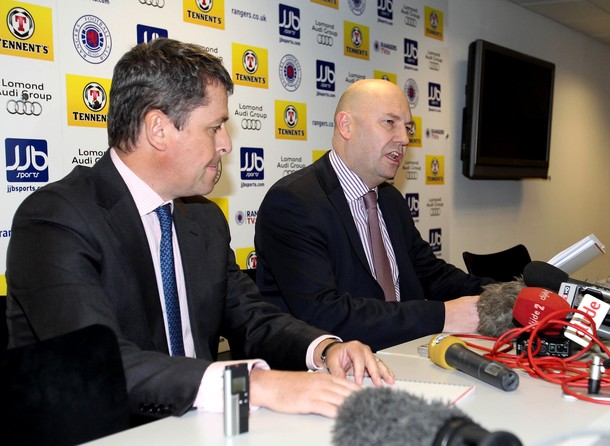 Ambivalence is defined as “the coexistence of opposing attitudes or feelings, such as love and hate, toward a person, object, or idea…”. In other words two opposite, irreconcilable feelings about the same thing. Looking at the current situation at Ibrox, what is occurring on the pitch appears distinctly ambivalent to the nightmare shambles off it. Indeed, while there is nothing but despair, frustration, anxiety and fear regarding the club’s perilous situation, the performances from the team during those 90 minute periods in-between are nothing short of inspirational.
During this last 2 and a half months, the administrators have blundered from one mess to another, after initially looking like accomplished professionals who could fix the club’s bleeding and seamlessly hand it to a new owner. Indeed, initially Duff & Phelps’ David Whitehouse and Paul Clark appeared to be intelligent men, competent in fiscal management and resolving stricken companies. As time has gone on, and deadline after deadline has passed, with no established ‘Preferred Bidder’ confirmed never mind takeover completed, Whitehouse and Clark’s time at Ibrox looks increasingly inept.
Compare this with the past 4 matches the side has played. After a disappointing capitulation at Tannadice on the 17th March, Rangers have gone on a thunderous 4-game winning streak, including victories over then-soon-to-be-crowned champions Celtic, and a tough trip to Tynecastle post-split. Despite the continual upheaval regarding the club’s status and future, the team has produced on the pitch.
Looking back, the fear going into the second last Old Firm match was that had the visitors won, the title went with it. And that would have been horrendous. Cue a cavalier charge towards the Celtic goal, with that opening peach from Sone Aluko which set the tone for a dominant performance and victory, despite a late comeback from the Parkhead side. Indeed, the likes of Brian Laudrup stated on Sky Sports categorically before the game that ‘yes, Celtic will win the league, but not here, not today.’ His assurance and defiance put the hairs on the back of the neck up. And the Great Dane was spot on. There was no way Rangers were going to let our old rivals savour the title on our patch. The match finished 3-2, and boasted some of the best atmosphere Ibrox has seen in its long history. The fans’ similar defiance clearly helped the players – the true 12th man that the Ibrox support so often is.
The following match at Fir Park saw a grittier display – after conceding a poor early goal from Estonian striker Ojamaa on 6 minutes, a wonderful long-range effort from Steven Whittaker levelled it up soon after, and a late McCulloch strike landed Rangers all 3 points. A fairly comfortable 3-1 victory over St Mirren followed, despite missing 2 penalties, before the latest chapter at the weekend.
Rangers travelled on Saturday to Tynecastle, to face a decent Hearts team who comfortably made the top half for the split. A fairly comfortable display was rewarded after 29 minutes when that man Sone Aluko again showed his class with a stunning free kick, which led to a pretty routine 3-0 scoreline in which Andy Little, the bit-part striker from Northern Ireland bagged a brace.
So, 4 matches in a row and 12 points. Of course, it is all fairly meaningless anyway. Despite being docked those fatal 10 points, the Govan side remain 11 points ahead of third-placed Motherwell – second place is pretty much assured regardless. But it has been buoyant to witness the potential in this team. Early in the season it was dominant, and topped the table with aplomb. In the past month we have observed a return to that kind of form, even in the absence of Steven Naismith who is thankfully fit again and could feature before this season is over. The squad is promising, and even in its darkest hour has managed to halt the football bleeding caused by the administration process, and turn it around. Maybe the players are doing it for the supporters as much as anything, but there is cause for optimism.
Naturally there is so much work to be done off the pitch before anything can be realised for next season, but if this squad can remain relatively intact over the summer then all is not lost.
This article been slightly more cheery than my recent doom & gloom comments, but the Hearts result and performance gave me a small amount of hope. And here is something nice to end on.
Would it not be something if, by next season, we get taken over, and can keep our current squad:
Aluko on the left wing and Naismith on the right.
That really would be rather good.